In December 2019, a team of 23 people from Deloitte’s Cardiff office braved a cold, rainy evening and took part in the World’s Big Sleep Out, to support local charity Llamau. Gareth Pritchard was one of them – here’s what he had to say.

What is the World’s Big Sleep Out?

It’s a mass sleep out, where 50,000 people world-wide joined forces to sleep out under the stars on Saturday 7 December 2019. Cardiff was one of the 52 cities to hold a Big Sleep Out event that night and the setting was Cardiff Castle.

The Deloitte team were sleeping out to raise funds for Llamau and the life-transforming work they do. The money Llamau raised from this event goes towards supporting young people and vulnerable women who are homeless or at risk of homelessness.

The sleep out does not aim to replicate homelessness, but it does give you an insight into the challenges faced by rough sleepers.

Have you done a sleep out before?

No, it was my first time sleeping out. Truth to say, I was a bit nervous about it bearing in mind what the weather can be like in Wales, but excited at the same time. We had a great team spirit and everyone in the Deloitte team was looking forward to getting together to support a really good cause.

What drew you to take part?

A very good question.  Choosing to sleep outside in Wales in winter, open to the elements, is a daunting option. However, the sad reality is this isn’t a choice for over 70 million people globally who are displaced having lost their homes through war, natural disasters or extreme poverty.

If we all band together, we can fight to end homelessness, so I took part to raise awareness and funds to tackle the issue. 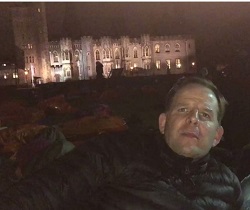 Not many of us in the Deloitte team actually slept and the weather conditions were extremely challenging. What is humbling is that we only had to do this for one night and some people have no choice and have to do this every night.

The organisation of the event was great. I’d had a very busy day and had to dash home to pick up my wet weather gear before heading over to Cardiff Castle. There was a show from 7pm and some food and refreshment stalls we could visit. We happily queued up for hot tea, coffee and pizza!

The amount of rain we had that night was unexpected and in amongst the 400 people taking part, at one point you might have thought we were at the grand opening of Cardiff Castle’s wet and wild theme park.

Unfortunately, the monsoon type rain that fell from 11pm, and the gale force winds that followed, eventually got to us. We did have a good supply of Deloitte umbrellas that we all thought performed superbly well under the conditions, but in the end we had to call it a night. We may have initially laughed in the face of Mother Nature’s onslaught but health and safety saw it as no laughing matter and we declared, by unanimous decision, Mother Nature the undisputed champ, forcing us to retire early. 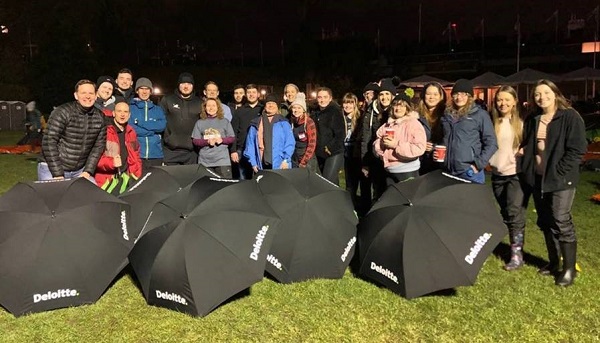 It was great to hear that, out of all the teams taking part, the Deloitte team raised the most funds at the Cardiff sleep out. The experience is one we’ll not soon forget and did give us all the smallest taste of what it is like for someone who has to sleep out in the cold and, in many cases, get up and go to work the next day.

Many Deloitte people across the UK were also sleeping out that same night in another city's Big Sleep Out event and were tweeting about their experiences. I was chuffed to learn that my ‘live from Cardiff Castle' tweet was considered the top performer on our firm’s Twitter feed that evening and the video clip I shared was viewed over 1,500 times!

Live from #BigSleepOut #Cardiff - Gareth Pritchard, partner at Deloitte Cardiff and team, settle down for the night... pic.twitter.com/XQi046bL0S

Why do you support Llamau?

Our Cardiff practice’s chosen charity is Llamau. It’s part of Deloitte’s One Million Futures strategy which aims to help one million people get to where they want to be, whether it’s in the classroom, the workplace or the boardroom.

Llamau aims to eradicate homelessness and their work is really important as they support some of the hardest to reach groups in society - young people and vulnerable women. By supporting Llamau, we will help these people to access learning, develop new skills and build an independent future. All in all, a great cause.

This is just one of the events that our people in Cardiff will be doing to support Llamau. We’re really excited about what we have planned for 2020!

Gareth leads our indirect tax practice in the South West & Wales. He is CTA qualified and has over 20 years’ experience advising clients across a portfolio that includes HNWIs, family run private businesses and large global corporate groups.

Gareth is also our impact partner for Deloitte in Wales, and leads our relationships with our charity and social partners in Wales.