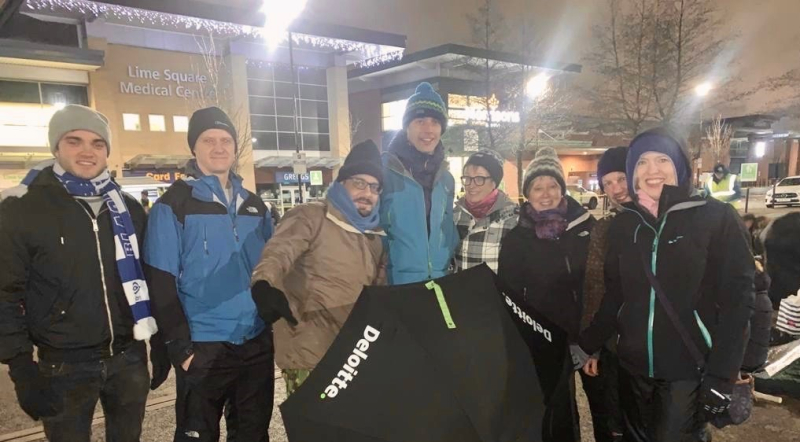 Thousands of people joined The World's Big Sleep Out on 7 December to create the world’s largest display of solidarity with, and in support of, those experiencing homelessness and displacement. Over 90 team members from Deloitte took part across the UK, raising over £120,000 to help end homelessness. Scott McKenzie, Tax Analyst, Deloitte Manchester shares the highs and lows from the night.

I slept out in a very cold, wet and windy car park in East Manchester on a Saturday night in a bid to raise awareness and much needed funds to end homelessness. If you’re wondering what it was like then here is my first hand of account.

For those of you who don’t know me, I’m a new graduate who joined the Deloitte tax team in September. If somebody told me when I was going through the Deloitte recruitment process that I’d be sleeping on a car park with several colleagues (including the person who interviewed me!) in a few months I don’t think I would have believed you! However, one of the key things that attracted me to Deloitte was the opportunities to get involved in weird and wonderful events that help so many people in the surrounding communities. The amount we have raised from this one night is quite unbelievable – over £120,000 – and we hit the top of the worldwide leader board for the World’s Big Sleep Out!

The Sleep Out – Feeling nervous!

We all met at the Deloitte Manchester office at 7PM and made our way to the Sleep Out location together. The town was heaving because of the Manchester City – Manchester United derby. We listened to the end of the game in the car on the way to the event which helped to keep our mind off what we were actually going to be doing that evening.

When we turned up at the car park everybody was in high spirits and smiling. The temperature was actually quite mild for a night in the middle of December, however we were aware of the incoming storm – heavy rain and strong winds. The night started off with some entertainment - a storyteller, a singer and an ex-homeless poet who had been helped off the street by an organisation who supported him to work on his talents. We even managed to watch the Anthony Joshua fight on a laptop shielded by an umbrella donated by a brave guy who was willing to sit out in the rain to watch the fight.

Not long after, the rain turned torrential! We all got in our sleeping bags and attempted to go to sleep. An hour later and I was still lying in my sleeping bag using my soaking wet gym bag as a pillow and holding on to my umbrella for dear life as it tried to fly away in the wind. After an hour or so I realised that there wasn’t going to be any sleep tonight. At around 11:30 shouts came from the medical tent, they had ordered pizza to go around for everyone! The only problem was I couldn’t move as I knew I would never be able to get comfortable again. Thankfully one of the Deloitte Partners stepped up and passed around some delicious hot pizzas, a luxury I am very aware is not a reality for those living on the streets.

Finally morning came – at 6am we all emerged out of our sleeping bags and were shocked to discover we were amongst a few hard-core left exposed to the weather, with others having taken shelter under covered trolley parks or the nearby medical centre. We finished with a Mince Pie and coffee from Greggs and headed home to our nice warm homes to recover from the night.

The stark reality of this is that some people actually have to do this every single night, nowhere to get warm, nothing to eat and no shelter from the elements. Next time I walk past a homeless person on the streets I will be reminded of this experience and the struggles they must go through. We need to put a stop to this. Through our One Million Futures programme at Deloitte, we work with several charities and social enterprises working to end homelessness. In Manchester, our team supports Depaul to provide emergency accommodation through the Nightstop programme.

A massive thank you to all of my friends, family and colleagues who have already donated. For those who would like to support of this very worthy cause please follow the link here. Scott McKenzie is an Analyst in the Deloitte Tax team based in Manchester. He joined Deloitte as a graduate in September 2019.