Lowest volume of new starts in over five years
Following the three year high in construction starts reported in our summer survey (October 2018 – March 2019), we saw a 49% drop in volume in this survey. At 1.8 million sq ft recorded between April and September, the volume of new starts falls almost 15% short of the long term average and is also the lowest since our summer 2014 figures.

The number of office schemes that broke ground also fell markedly, from 37 reported in the previous survey, to only 24 new construction starts. However, there is currently up to 3 million sq ft in demolition, which suggests that the next survey could see an uptick in new starts again, albeit at a modest rate.

The City’s new construction tumbles
The overall volume under construction across London totalled 11.9 million sq ft across 92 schemes as of the end of September. While this figure is down by 10% survey on survey, it remains above the long term average of 10.6 million sq ft.

The City was notably quiet with only four new schemes breaking ground in this survey. The construction levels in the City have been gradually declining in the past few years and its dominance has diminished from 59% of central London construction activity in 2016 to 45% in the present survey. 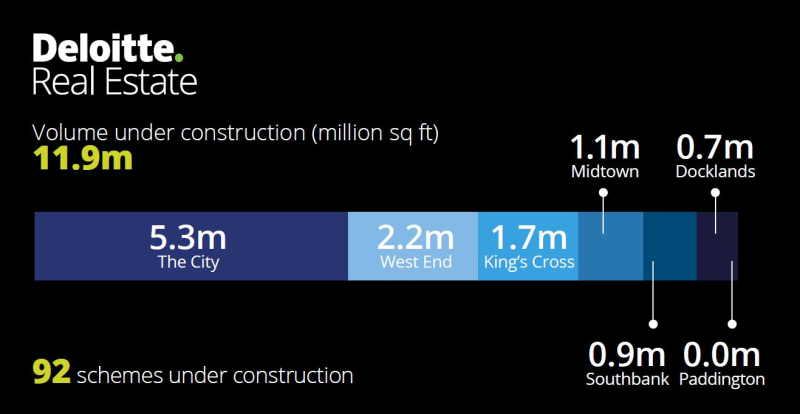 TMT continues to drive office demand, with FinTech to follow
Technology, media and telecoms (TMT) has further increased its proportion of pre-let space under construction, from 35% to 43%. Submarkets, which have traditionally competed for financial workers, such as the City and Canary Wharf, are now also looking increasingly to lure TMT tenants from other areas.

FinTech firms are also increasingly attracted to London because of the already established financial markets, a deep tech talent pool, as well as supportive regulation. The recent proposal by the Home Office to extend the post-university visa for those who studied in the UK has been welcomed by the FinTech industry. But Brexit creates a challenge to the future FinTech talent pool. 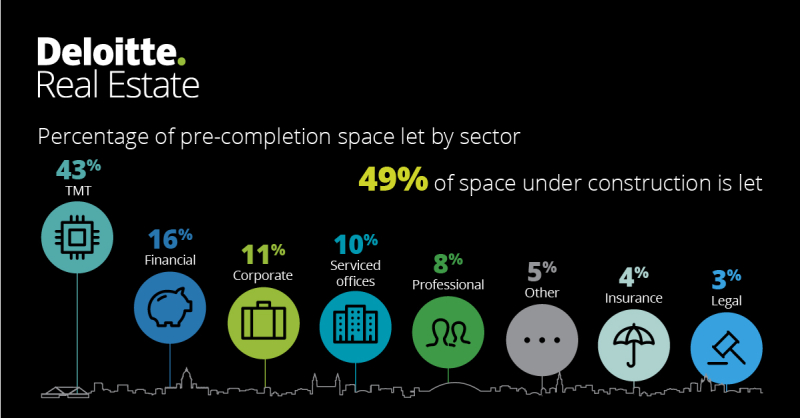 The London skyline – not quite what it seems
To the casual observer the many tower cranes in the London skyline would suggest that there is a large amount of office accommodation for occupiers to choose from. In reality, however, much of the office space that is currently under construction is under offer or pre-let. Looking at 2020 alone, 40% of space that is expected to be added to the market, has already secured tenants.

In order to secure preferred options, businesses are having to launch their searches well ahead of lease expiries, often more than two years in advance. Ensuring the best quality office space is of growing importance for businesses wanting to attract and retain talent, while buildings are increasingly seen as part of a company’s brand.

The importance of good quality office buildings in attracting talent in the competitive labour market, coupled with further expansion by tech and FinTech will continue driving office demand. However, current economic headwinds, the impact of the rise of co-working and environmental challenges, are putting increasing pressure on property developers and landlords.

Find out more
Visit our site to find out more about the London Office Crane Survey, download the report and share our latest findings with your clients.