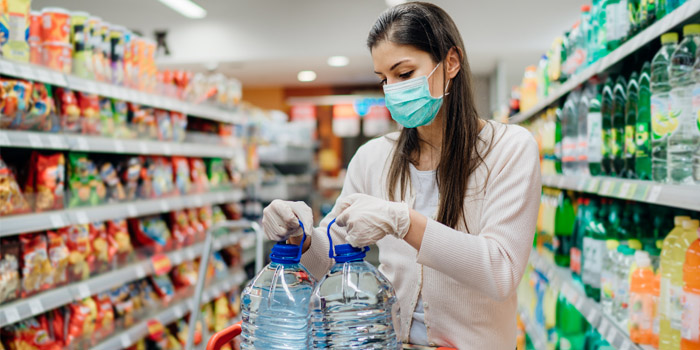 The dislocation between supply and demand created by the pandemic is starting to weigh on the recovery. Growth is being held back by supply problems, labour shortages and rising prices. Along with the effects of the Delta variant, such supply issues led to a sharp drop in China’s Caixin index of service activity in August, leaving the sector contracting for the first time since COVID-19 hit early last year. In the US Friday’s payroll data, one of the most important economic releases of the month, came in far below market expectations. Respondents to the UK manufacturing PMI index blamed shortages of materials, shipping capacity and staff for decelerating output growth in August.

Rarely has the world economy faced such constraints. A recent survey by the Confederation of British Industry revealed the most severe shortage of parts since the index started in 1977. According to the Freightos Baltic Index, shipping costs are up almost sevenfold on the last quarter of 2019. Consumers are facing reduced choice, delays and higher prices for some products. In the UK Wetherspoons has declared it was running low on beer, McDonald’s ran out of milkshakes and shortages of chicken have forced Nando’s to close some of its restaurants. In short, this is serious.

Periodic factory and supply chain shutdowns have created an order backlog and left other factories without intermediate parts. The problems continue. Factories in Asia, the world’s manufacturing hub, have been affected in recent months, with many having to shut as the region struggles with a sharp rise in cases.

Disruption at ports has contributed to a sharp rise in shipping costs. The world’s third-largest cargo port in Ningbo-Zhoushan, eastern China, partially shut down last month after one worker tested positive for COVID-19. Earlier in the year the Yantian port in Shenzhen was partially shut for several weeks. The blockage of the Suez Canal for a week last March, caused by the container ship Ever Given, was an additional source of delays. The cost of shipping from China, other parts of Asia and the US are at record highs, and may well rise further. Shipping is normally much busier in the second half of the year as retailers in Europe and North America prepare for Christmas and New Year demand.

With hindsight economists – this one included – should have expected much of this. In the last 18 months the world economy has been hit by the greatest, most synchronised shock in modern history. Last spring the UK lost the equivalent of several recessions’ worth of GDP in a few weeks. The recovery has packed years of normal growth into a few months. Demand has swung erratically and unevenly. The lockdown triggered a run on computer monitors and office chairs, and, as spring came, surging demand for bicycles. In recent months everyone’s been buying sports and camping gear. Meanwhile sales of suits, ties and other forms of office wear have slumped. Production, demand and stock levels have gone haywire, making forecasting and planning ever more speculative. No wonder there is such a mismatch between supply and demand.

No system could have coped seamlessly with such shocks, but those systems have flexed. Food retailers have narrowed some product offerings to cope with shortages. Manufacturers are stockpiling products awaiting the arrival of key components. Restaurants have simplified menus. For me the surprise is not that there have been shortages, but that they have not been worse. More importantly essential services – health, policing, utilities, food, refuse collection, broadband and so on – have generally held up well. Almost 5.5bn vaccines have been administered, a remarkable feat of science and logistics, achieved in less than 18 months and amid great disruption. Systems have adapted. Given the forces at work, it could have been much worse.

Many of today’s supply problems will self-correct. Surging demand and prices will, in time, expand capacity and increase supply. Higher wages in shortage sectors will attract new entrants. Higher vaccination rates should help reduce the need for restrictions. We don’t need to reinvent our manufacturing and logistics systems. But, just as the financial crisis warned of the dangers of securitisation, this one has exposed more fundamental vulnerabilities. In some areas there will be lasting change.

The first relates to geopolitics. Tensions between China, the US, and the West in general, have continued to mount through the pandemic. The crisis itself has highlighted how production of previously everyday items, such as semiconductors and medical supplies, has shifted offshore in a way that create potential vulnerabilities. We need to avoid drawing the wrong conclusions here. Some of the problems of supply of generally foreign-made goods, such as with PPE and semiconductors, have been due to the impossibility of forecasting demand, not the location of factories. Diversity of supply, including from overseas, tends to strengthen resilience.

Nonetheless, governments and corporates are thinking hard about the risks in their supply chains. The heyday of globalisation at the turn of this century seems like a different age and some production is likely to end up closer to home. Companies need to manage their exposure to geopolitical tensions while governments are trying to boost domestic industries.

The focus today is on shortages of semiconductor chips. These are the basic material of a vast array of modern products. Pandemic-fuelled demand for electronic items, such as laptops, coincided with factory closures and Chinese stockpiling designed to pre-empt a ban on sales of US-engineered chips to Huawei. The resulting chip famine has led to a global shortage of cars. Toyota, the world’s largest producer, has scaled back global production by 40% due to chip shortages.

Much of the world’s supply of semiconductors comes from Taiwan and South Korea. The US, Japan and many European governments want to increase domestic production of what has come to be seen as a strategic commodity. The costs are mind-boggling. Earlier this year the FT’s innovation editor, John Thornhill, wrote that the giant semiconductor manufacturing plant being built by the Taiwan Semiconductor Manufacturing Company in Taiwan at a cost of $20bn is likely to be the third most expensive building in modern history (after the Grand Mosque complex around Mecca and the International Thermonuclear Experimental Reactor in France). The EU has set a target to double its share of global chip manufacturing to 20% by 2030. The US recently announced $52bn in spending on domestic semiconductor manufacturing and research. UK prime minister Boris Johnson announced that there would be a security review into the recent acquisition of UK chipmaker Newport Wafer Fab by a Chinese-owned company Wingtech. The National Security and Investment Act will come into force in the UK next year, which will give the government more power to restrict foreign investment that could threaten the UK’s national security.

In a host of other areas, from vaccine manufacturing capacity, to PPE production, access to technology and rare-earth metals, governments are rethinking existing supply models.

The second lesson learned is that, as the name implies, ‘just-in-time’ supply chains leave no room for error. Over recent decades just-in-time delivery has brought significant gains by reducing inventories, or stocks, and cutting costs. But the recession has exposed the risks that come with wafer thin – or non-existent – stock levels. In extreme cases, when stocks run out, the search for efficiency creates inefficiencies and lost revenues. Companies and governments are reassessing the balance between inventory efficiency and resilience and, in some cases, are shifting towards resilience. Toyota, for instance, is stockpiling up to four months of some parts. Western governments will surely expect their health systems to have greater diversity in the supply of PPE, including from home, and to run larger stockpiles. Such reassessments are nothing new, and the balance of advantage as to location changes continuously. Hourly wages in Chinese manufacturing have risen six times faster than US wages in the last 20 years, reducing the gains from shifting production to China. Bucking a multi-decade trend of deindustrialisation, jobs in US manufacturing have been rising for the last ten years, in part because of the ‘reshoring’ of production. A wave of new business regulation in China, geopolitical strains and high shipping costs also need to be factored in by businesses sourcing in China.

The third feature of the pandemic has been its disruptive effect on labour supply. Shifting patterns of demand and, in the UK, an exodus of foreign workers, have created a labour market marked by skills shortages and elevated unemployment. The pandemic has changed some people’s view of the sort of work they want to do, for instance tempting long distance lorry drivers to switch to less unsocial shifts as delivery van drivers. Booming demand in sectors such as manufacturing and construction adds an extra dimension. Britain faces an acute shortage of lorry drivers, with around 100,000 vacancies compared to a pre-pandemic workforce of 600,000. Brexit is the main factor in the UK, though the US also faces a shortage of drivers, described by the American Trucking Associations, as the “worst ever”. The closure of training schools in the pandemic, the loss of drivers to other occupations and stricter drug and alcohol testing have all played a role. Higher wage rates and new training schemes will, in time, ease the shortages, though in the UK and US industry bodies are lobbying their governments to give visas to foreign drivers.

The pandemic has placed unimagined pressures on global supply chains. Now they face intense scrutiny from policymakers and corporates. Just-in-time has been supplanted by talk of just-in-case deliveries. Considerations of national security and safety of supply loom large. India’s prime minister, Narenda Modi, is telling voters to “get vocal for local”.

We need also to recognise the strengths in the current system, which, by and large, has held up well in the face of exceptional disruption. Global supply systems will adapt and change, some production will come home, or closer to home, stocks in some areas will run higher. The system that eventually emerges from the crisis is likely to be more resilient, and more able to cope with disruption, especially in vital areas such as medical supplies.

PS: The surge in COVID-19 cases and hospitalisations in Israel has raised concerns that even highly vaccinated countries could struggle in the battle against COVID. On balance three factors – vaccine efficacy against hospitalisation, better hospital outcomes and changing behaviour – mean that we are cautiously optimistic. Israeli data show vaccine protection against infection waning over time, but protection against severe illness and hospitalisation – which is what really matters – is holding up. Early Israeli data show that booster jabs provide renewed protection against infection. Crucially, jabs have significantly weakened the link between infections and hospital admissions. At the current level of infections, the UK was registering over 3,000 daily hospital admissions in January. Today it is seeing just over 900. Among those who are admitted to intensive care, outcomes have improved and stays are shorter. Despite the final easing of restrictions in July caution persists and mobility in the UK remains below pre-pandemic levels. All these factors suggest that the UK should be able to avoid another lockdown similar to that of last winter. However, there are two main risks to this view. First, a surge in non-COVID respiratory illnesses is inevitable as people return to school and offices. If combined with growth in COVID cases hospitalisations could rise quickly, something that already appears to be happening in parts of Scotland. Second, the risk of new COVID-19 variants is ever-present and would challenge the efficacy of existing vaccines and our ability to rollout new versions if necessary.