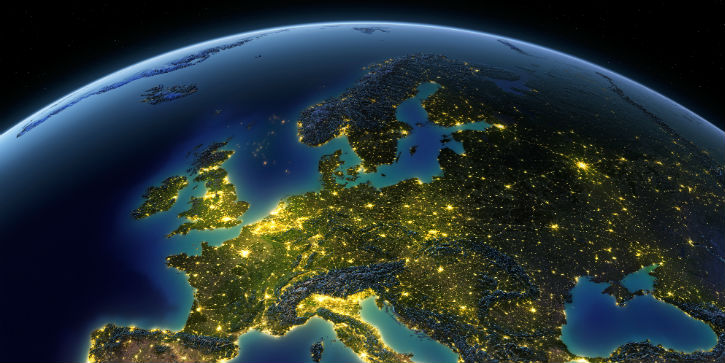 A referendum on the UK's membership of the EU is due to take place by the end of 2017. The vote seems most likely to take place next year, either in June or September. A 2016 referendum offers the advantage of reducing the period of economic and political uncertainty facing the country; it also avoids the risk that the Britain's role in Europe would become an issue in general elections in France in March and April of 2017 and in Germany in September 2017.

So, with a UK referendum possibly just over six to nine months away, what do the opinion polls show?

UK voters have consistently been among the most euro-sceptic in Europe. Nonetheless, in the last 40 or so years the UK public has been more likely to support staying in the EU than leaving. Since Ipsos MORI started polling on this issue in 1977 on average 53% of voters in a simple yes/no poll have supported membership and 47% have opposed it. The yes vote reached a low of 26% in 1980 rising, over the following decade, to a peak of 63% in 1991, shortly before the pound's ejection from the European Exchange Rate Mechanism.

In June of this year Ipsos MORI showed UK public support for the EU, again on a straight yes/no poll, at an all-time peak of 75%. Since then it has fallen away in parallel with heightened UK public concerns about immigration. The most recent Ipsos MORI poll, from mid-October, showed the yes vote at 59%.

More recent polls suggest a further narrowing of the yes lead. Across eight polls carried out in November the yes vote averaged 52% and the no vote 48%.

The last referendum on UK membership of what was then the European Economic Community (EEC) was held in 1975, just two years after the UK joined the EEC. The vote was an overwhelming victory for EEC membership, with the electorate voting by 67.2% to 32.8% to stay in.

A 2016 EU referendum is likely to be a tougher sell than the 1975 EU referendum.  In an intriguing paper economists David Bowers and Richard Mylles of Absolute Strategies Research (ASR) outline how the political landscape has shifted in the last 40 years.

Bowers and Mylles point out that in 1975 the debate was about membership of a trading bloc, the Common Market. For sure, the commitment to "ever closer union" was in the Treaty of Rome, but in 1975 few in the UK, especially in the yes campaign, paid much attention to it. Since then the EU has grown from 9 to 28 members, expanded into Central and Eastern Europe, created the Single Currency and acquired more characteristics of a federal union. A 2016 or 2017 EU referendum seems likely to have a more political flavour than the 1975 vote, with a focus on the benefits and costs to the UK of a more ambitious, integrated, federal-like Union. This may well prove a tougher sell for the yes campaign than the trade and economic arguments that won the day in 1975.

In 1975 the UK economy was in a shambles, slipping into the role of sick man of Europe. In the previous three years the UK had endured a recession, double digit inflation, endemic industrial unrest and the imposition of a three-day working week to save scarce energy supplies. British voters in 1975 looked enviously to the prosperity and stability of Germany. Today the UK is seeing decent growth, while the euro area grapples with the migration crisis, sluggish activity and the difficulties of building a durable monetary union. On a relative basis the performance of the UK economy looks, for now at least, pretty good. The burning platform of UK economic failure which helped win the 1975 referendum is absent.

The salience of migration in the Europe debate today marks another difference with 1975. The Maastricht Treaty of 1992 established the right of people to live and work anywhere in the EU, but as Bowers and Mylles observe, it was EU enlargement into Central and Eastern Europe in 2004 that caused immigration into the UK to rise markedly, pushing migration up the list of UK voter concerns. More recent migration from North Africa and the Middle East, and the growing problems facing the Schengen nations, have added new concerns.

The final factor cited by Bowers and Mylles was the enthusiasm of the majority of the press for the Common Market in 1975. The press gave the then Prime Minister, Harold Wilson, largely uncritical coverage of his negotiations for a "better deal" in Britain's relationship with the Community. (Historians tend to the view that Wilson actually achieved little in his negotiations with the Community; but he deftly turned meagre result into a public relations triumph). The lone dissenting voice in a general mood of press enthusiasm for the EEC was the Communist Morning Star. This time round it seems likely that a number of major papers will take a euro sceptic line. And it is inconceivable that the media will be as uncritical in its assessment of the Prime Minister's current negotiation with the EU as it was in 1975.

The bookies odds and the polls suggest that the most likely outcome is that the UK will vote to remain in the EU. But that is clearly not assured – and it's certain to be a closer run thing than the landslide yes vote in 1975.

We recently published a more detailed briefing paper setting out the key economic and political considerations on the UK's referendum on EU membership. Download UKMembershipOfTheEuropeanUnion