Humans have tried to create robots in their own image for centuries. One of the first efforts came in the 1400s from Leonardo da Vinci in the form of his mechanical knight, which could stand, sit, raise its visor and independently move its arms. Now robotics and machine learning have developed so much that they look set to disrupt all areas of our lives – especially work. This is going to have a tremendous impact on employers and employees alike. Will humans become marginalised?

It seems clear that all industries will be disrupted by automation in one way or another (see Figure 1 from the Deloitte report Transformers: How machines are changing every sector of the UK economy). For example, repetitive manual tasks currently performed by humans, like operating machinery, are being steadily replaced by mechanical robots; many repetitive cognitive tasks, like scheduling, can now be performed by algorithms – or software ‘robots’. However, robots have been less successful (so far) at mimicking human behaviours and soft skills, like perception, creativity or social intelligence.

Mining and quarrying, has benefited from robots that are able to help people carry out dangerous tasks, such as excavation and gas detection. Similarly, the manufacturing industry has seen enormous disruption due to automation. In China, for instance, the Changying Precision Technology Company has reportedly replaced 90 per cent of their human workforce with robots, reducing their headcount from 650 to 60, and improving productivity and quality of output as a result.

Figure 1. Probability of automation by industry 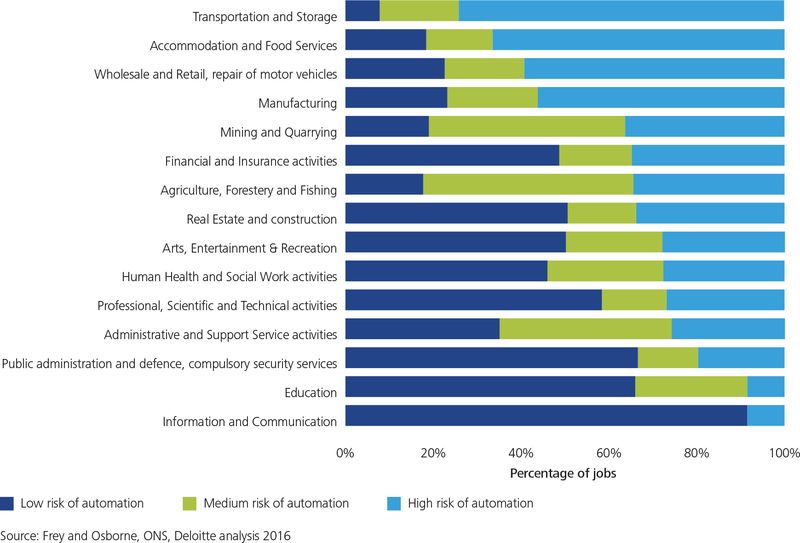 If automation is so transformative, why isn’t everyone doing it?

New technology can be expensive and inconsistent. As technologies mature, or become less expensive (compared to human labour), businesses are more likely to invest in understanding how automation can augment their operating model, as well as considering the wider implications for their human workforce.

What is certain is that automation will cause significant disruption across almost all industries. But such disruption also presents an opportunity for businesses to raise productivity, deliver better value to consumers and explore new operating models.

Read Transformers: How machines are changing every sector of the UK economy.

Graeme heads the Robotic Process Automation team that deploys RPA tools for clients, either directly within clients’ organisations or as part of other Deloitte services. This works includes: finding the right processes to automate, developing and managing the ‘robots’ to deliver automation, and changing the humans’ behaviour so that the full benefits of the RPA programme are realised. He’s been delivering business processing services for the last 15 years.

Angus is Vice Chairman of Deloitte and also serves as our London office Senior Partner.

Angus has thirty years’ experience in professional services, most recently leading the firm’s Transaction Services practice. He specialises in advising his clients on business integrations and separations.

In his London role, Angus works with businesses, policy makers and opinion formers. He has a particular interest in how the city maintains and grows its global leadership in high skill sectors, with a focus on the need to attract talent to London. He has also conducted in-depth work on the medium and long term impact of technology and automation on the city and more widely on the UK, both in terms of opportunities and threats and in particular at the future of employment over the next ten to twenty years. He leads the firm’s client programmes for China (since 2016).

Angus has served on the Mayor of London’s senior advisory group for his London economic plan. He holds an MA from the University of Cambridge and is a freeman of the City of London