Understanding the drivers of inequality in public health

Public health outcomes have traditionally been measured using life expectancy at birth, and more recently, healthy life expectancy (HLE).  Office of National Statistics shows that while women have a longer life expectancy, they live fewer years in good health (HLE fell from 63.7 years (2014 to 2016) to 63.3 years (2017 to 2019)), whereas for men HLE remained constant at 63.1 years. These statistics, however, hide large disparities among different groups of the population.

Definitive research by Sir Michael Marmot and his team at the University College London Institute of Health Equity has calculated that health inequalities cost society £31 billion a year in lost productivity and demonstrated that reducing inequalities is a matter of fairness and social justice. Their 2010 report, Fair Society Healthy Lives, identified six policy recommendations for reducing inequalities, ranging from giving every child the best start in life to strengthening the role and impact of prevention. Their ‘Ten Years On’ review in February 2020, identified increases in health inequalities and demonstrates how policies enacted by UK governments since 2010 have contributed to increased health inequalities. They identified the causes as rising child poverty, closing children’s centres, reducing per-pupil education spending, increases in poorly paid work, a lack of affordable housing, multi-generational and overcrowded housing and reductions in adult social care. They also emphasised the growing body of evidence on climate change as a driver of health inequalities and the need to bring together the agendas on climate change, the social determinants of health and health equity

Who is responsible for public health services?

The field of public health is diverse and interdisciplinary. While responsibility rests ultimately with central and local governments, between April 2013 and October 2021 policy implementation and some aspect of delivery were vested in Public Health England (PHE). Local public health services were the responsibility of Directors of Public Health (DsPH) and their teams together with a wide range of public and private stakeholders. Indeed, their knowledge of and expertise in population health and close understanding of local places, together with their broader role in local authorities, means they are at the centre of local decision-making on public health issues, including tackling health inequalities.

What is the state of public health funding?

Cuts in public health funding over the past six years at the same time as increased responsibilities have undermined the effectiveness of public health. Between 2013-14 and 2-19-20 there was a 15 per cent reduction in the public health grant impacting some services more than others (see Figure 1). There was also a 48 per cent reduction in local authority spending on children and young people’s services and reductions in the funding of services directly commissioned by the NHS, such as immunisation and screening).  Counterintuitively, the funding cuts between 2010‑11 and 2019‑20 were deeper in the most deprived local authorities, driving geographical inequalities still further. 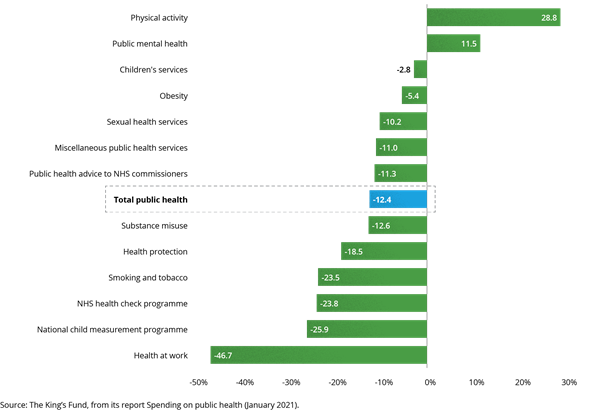 What were the public health challenges pre-COVID-19?

As part of our research we conducted a survey of some 1,500 front line health and care professionals and interviewed some 75 public health experts. We asked both groups to identify the top three challenges they saw in creating an effective public health system pre‑pandemic. Whereas the largest percentage of interviewees identified funding cuts, deep‑seated health inequalities, and fragmentation and lack of alignment between services as the biggest challenges (see Figure 2). Our survey respondents identified the challenges of a growing and ageing population, illustrating the downstream impact of failing to provide sufficient health prevention and interventional support.

Figure 2. What were the top three challenges the UK was facing in creating an effective public health system prior to the COVID-19 pandemic? 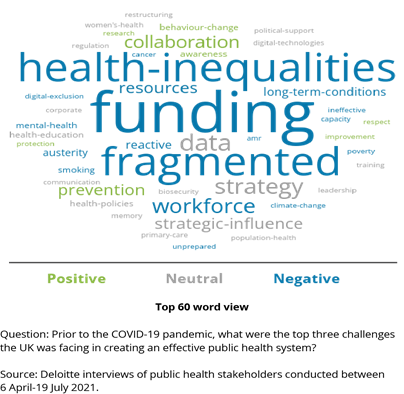 What impact did COVID-19 have on the public health system?

COVID‑19 has exposed and exacerbated the impact of health inequalities on health outcomes for specific groups of the population. Indeed the pandemic has shown the UK to be  a deeply unequal society and highlighted the critical need to tackle the social determinants of health more effectively.

When asked what top three words came to mind when describing the impact of the pandemic on public health, the majority of our survey respondents said death, stress, fear, mental health, anxiety depression, delay, backlogs, isolation, catastrophic and devastating.  Again reflecting their front line experience but also consistent with the research on the affects felt by the health and social care workforce.

Our interviewees identified the top three weaknesses as health inequalities (28 per cent) data sharing , access and interoperability (26 per cent) and a poor or fragmented public health infrastructure (22 per cent). In terms of strengths, the agility, skills and talent of the workforce was the most mentioned (59 per cent), followed by the vaccination programme (27 per cent) and local knowledge and relationships (17 per cent).

How to achieve an equitable future for public health

Following the government’s decision to reform public health services and close PHE, the health protection capabilities of PHE and the NHS Test and Trace service (NHST&T) have been combined into a new UK Health Security Agency (UKHSA). On 1 October 2021, UKHSA was formally launched, bringing together the UK’s national public health science and response capabilities to: ‘Prevent, Detect, Analyse, Respond and Lead’. UKHSA aims to work in partnership with wider central government, the devolved administrations, public health agencies the NHS, academia and industry to provide effective preparation and response to the full range of threats to health while strengthening the health protection system and workforce.

At the same time, many of the health improvement and prevention functions of PHE transferred to the new Office for Health Improvement and Disparities (OHID), part of the Department of Health and Social Care (DHSC), under the professional leadership of the Chief Medical Officer. The OHID is expected to lead a cross-government effort to address the wider factors that contribute to people’s health outcomes, and to have a ‘relentless focus’ on health inequalities as part of the government’s ‘levelling up’ agenda. DsPH and their teams remain part of local government. Other PHE  responsibilities moved into NHSE&I and NHS Digital.

In the face of these organisational changes and the lessons identified, the public health system now has an opportunity to capitalise on the innovations and other positive developments seen during the pandemic. In addition, realising a sustainable future will require adequate funding to redress the identified funding gaps, leadership development and capacity and capability building to tackle the public health workforce gaps. There will also be a need for public health to be fully recognised and valued as an integral component of the new ICS, harnessing public health’s  knowledge of place‑based solutions and population health management to reduce health inequalities and improve health outcomes for all.

The evidence on the causes of health inequalities is irrefutable, as is the understanding that even well‑designed policies could take years to have a meaningful effect; and will require a long‑term, multi‑faceted approach. There will also be a need for more clarity on the priorities of UKHSA and OHID. Importantly, the public health resources will need to reflect the scale of the challenges as a result of the pandemic, if public health is to be put on a more sustainable footing.

Sam is a national award-winning pharmacist with local, national and international experience. Prior to joining the Centre, Sam was working alongside the Chief Pharmacist at Bart’s Health delivering trust-wide projects in service development and implementation. Prior to this Sam was the NHS England Chief Pharmaceutical Officers’ Clinical Fellow at Specialist Pharmacy Service, where she led various national projects on medicines use and digital healthcare. Sam is part of the global commonwealth health partnerships, an NHS England Clinical Entrepreneur, and a pre-doctoral fellow at Health Education England undertaking a PGCert in Healthcare Research Methods. Sam is also an associate of the Faculty of Clinical Informatics and Institute of Healthcare Management and has a Master of Pharmacy from King's College London and Diploma in General Pharmacy Practice.