Movember is upon us, marked by the emergence of upper-lip fuzz on men across the world. Since 2003, the Movember Foundation’s unrelenting goal has been to raise awareness of men’s health issues, with a particular focus on prostate cancer, testicular cancer and mental health and suicide prevention. Movember also seeks to challenge the status quo, shake up men’s health research and transform the way health services reach and support men. During the month formerly known as November, Mo Bros and Mo Sisters around the world rally in support of the cause to get people talking about these vital health issues. This week’s blog is my contribution to raising awareness, hoping to encourage my friends, family and colleagues to talk to the men in their lives about their health.

Why does Movember focus on prostate and testicular cancers and suicide?

Research statistics show why raising awareness of these men’s health issues is crucial.

Our recent report from the Deloitte future of public health series, Narrowing the gap: A fairer and more sustainable future for public health, highlights the fact that mental health challenges have been increasing for a number of years and that the COVID‑19 pandemic (especially lockdowns and home working) and the loss of employment opportunities, has resulted in a growing mental health crisis. This has created an urgent need to tackle the rising prevalence of mental health issues. Indeed, public health agencies around the world have warned of a tidal wave of mental health problems such as depression, suicide and eating disorders, making this year’s Movember campaign more pertinent than ever before.

Unsurprisingly, therefore, this year’s campaign looks at men’s mental health, focusing on prevention, early intervention and health promotion. It acknowledges that the issue of suicide is incredibly complex but that improving overall mental health and helping men establish better social connections can reduce the risk of suicide. The intention is to create a world where men take action to be mentally well and are supported by those around them. The aim is to reduce the rate of male suicides by 25 per cent by 2030.6

How has the Movember campaign grown globally?

Men’s health issues can affect everyone – not just men. As with any illness, the impact is felt just as heavily by wives, sisters, mothers, extended family and friends of those suffering with the health conditions, making it pivotal that people from all genders are encouraged to get involved and spread the word.7

Considering the statistics and the enormity of the task, it’s encouraging to see how the Movember movement has truly gone global. From small beginnings in Adelaide, campaigns have since been established in the US, UK, Canada, Spain, South Africa and into Europe. More than five million Mo Brothers and Mo Sisters have taken part in the annual event, raising a total of £737 million globally for men’s health since 2003.8 In 2020, the Movember community championed men’s health in 20 countries across the world.

Each year, a significant amount of money is raised to support research and education. In the UK, £19.1 million was raised for Movember in 2020, with 81.8 per cent of funds raised allocated to men's health projects.9 These funds support multiple projects from research into the development of effective treatments for cancer, to upstream interventions to build resilience in adolescent boys, all with the aim of ultimately reducing the number of preventable deaths.10 Latest discoveries and breakthrough treatments have brought us closer than ever to a cure for prostate cancer, but there is far more work to be done.11

This movement has spread across the popular culture on a global scale, from the creation of the ‘Moscars’ in 2010 to the introduction of moustache themes into video gaming franchises. The UK campaign has also resulted in high profile corporate partnerships including the creation of a special Movember post mark, and temporary placement of a grass moustache on a high profile national hillside figure.

How to get involved?

There are many ways people can get involved in this year’s campaign and become ‘Mo Brothers’ or ‘Mo Sisters’. These include, growing a moustache, moving more, hosting an in-person or online event or even ‘Mo Your Own Way’ choosing-your-own- challenge, and testing your limits in the name of men’s health. But most of all having fun while doing whatever you chose to do. Because we all love an acronym, I’ve developed the following, to illustrate the four ways of contributing to this year’s Movember campaign (see figure below): 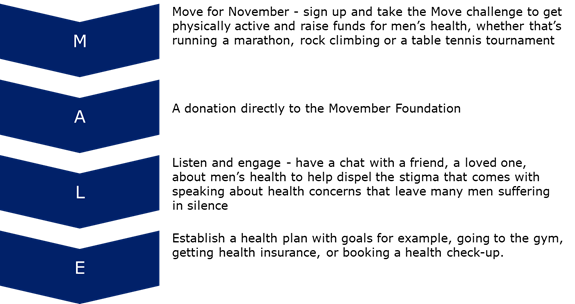 Personally, I would welcome a future where we are just as open about men’s health issues as other health topics at work and hope this blog encourages men to step forward if in need, knowing there is plenty of support out there. I hope this Movember campaign will continue to provide a much-needed catalyst for conversations about men’s health. Each of us can do our part by starting conversations with our friends, family and colleagues, encouraging them to share how they are feeling and letting them know you’re there for them.

For Deloitte employees, there is an abundance of support including a confidential Advice Line that offers independent support as well as a Mental Health Champion to talk through any concerns.

Andy is a Campaign Account Manager in Deloitte’s internal agency, 368. He leads a team responsible for delivering high impact marketing campaigns, with a focus on the firm’s Life Sciences and Healthcare, Government and Public Sector and Consulting business areas.