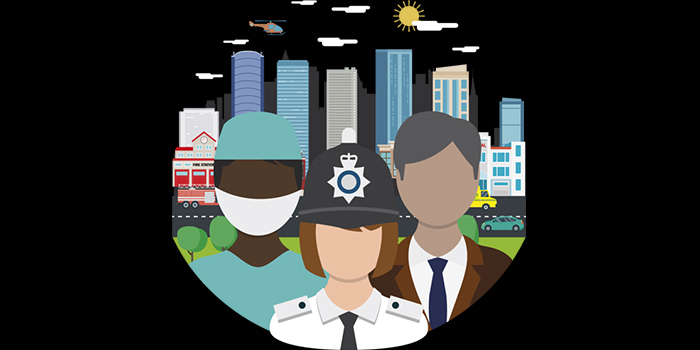 So the results of the election are now in, and the Conservatives have won a large majority, giving them a mandate to get on with implementing their manifesto promises. During their electioneering, all parties put the NHS and social care at centre stage, with the only differences being how much additional funding and new staff they would provide to tackle the acknowledged decline in performance. In October 2019, my public sector colleagues, together with the think tank Reform, published their eighth annual report, The State of the State 2019-20 the view from citizens, leaders and frontline public services.1 Friday the 13th, the morning after the election, seems like a good time to remind the new Government and those charged with implementing their policies of the 2019 report findings, particularly their findings on the NHS and social care.

The evidence for the report included an in-depth analysis of published data, an Ipsos MORI survey of 1,300 UK adults, interviews with fifty people in senior leadership positions across the public sector, and an online crowd conversation with 240 public-facing professionals, including nurses, police officers and teachers. All three elements of this primary research featured participants in England, Northern Ireland, Scotland and Wales to provide a UK-wide perspective.2

The research identified overwhelming support from the public for greater spending on services and concerns over a perceived increase in social inequalities. A key challenge that was identified was the fact that public sector professionals are all too often hampered by out-of-date technology and working environments.

Amidst the specific challenges identified, there was also much to be positive about, with public sector leaders enthused by the prospect of increased spending and strong public support for government action on big issues like climate change. There was also general agreement that the thriving public sector’s ethos at the frontline remains one of the UK’s core strengths. Seventy per cent of the crowd believe that the UK is a global leader in delivering public services, largely because of the public health and education systems, but some felt Brexit and austerity may have eroded the public sector’s international standing.

The percentage of people who want to see more public services, even if this means tax rises, rose from 46 per cent in 2009 to around 60 per cent over the last few years. Over the same timescale, the proportion of the public who want to preserve the current balance of tax and spending has dipped from a third to a quarter. This means that most of the public wants to see more money spent on public services and are willing, at least in theory, to pay more tax to fund them, and they increasingly want to see the government take action to alter the balance of tax and spending. 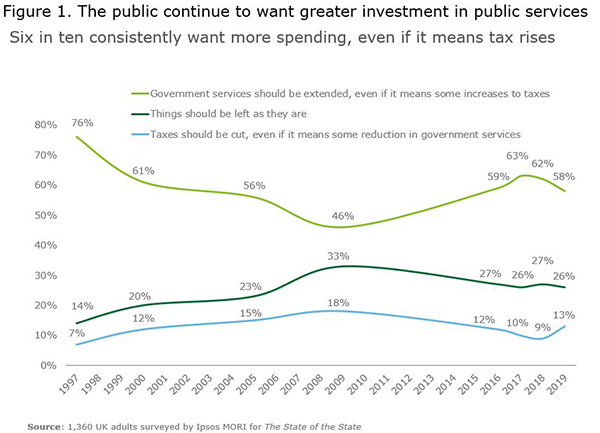 In recent years, the citizen survey asked which areas of public spending should be protected from cuts. This year, with the government committing to end austerity, the question was updated to ask which areas should be prioritised for spending. The citizen survey confirmed the findings from previous years, that the NHS, education and the police remain the public’s top priorities for public spending. However, there is growing support for spending on social care and housing (see Figure 2). 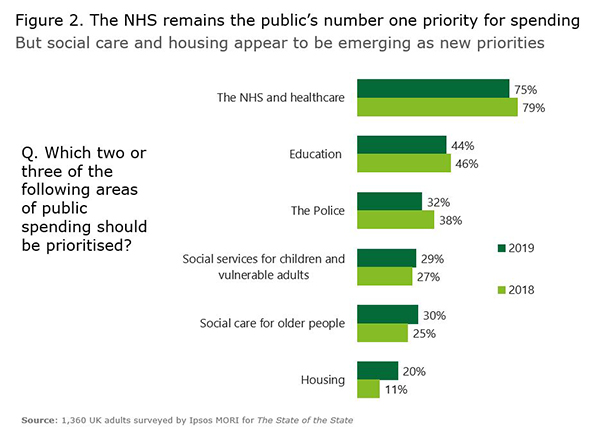 Specific findings on the NHS and social care

The NHS and social care leaders that Deloitte interviewed were consistent in their view that their current funding models are unsustainable and that the government faces a choice: either to take decisive action to create a fair, sustainable funding system for social care, or face costly, reactive, measures as a series of crises unfold. NHS, social care and local government leaders also talked about the need to recalibrate citizens’ expectations towards a more realistic provision. Many pointed to the need for greater self-care, ideally supported by up-to-date technology, as a crucial way of reducing demand on health and social care services.

While the report more generally highlights the changing attitudes of the public to austerity and an increase in the proportion of people who believe that the state should do more for them, this creates a dilemma for the NHS, where much of the ‘prevailing view’ is predicated on people taking more responsibility for their own health and wellbeing.

There were differing views from leaders on the impact that austerity has had on the NHS. 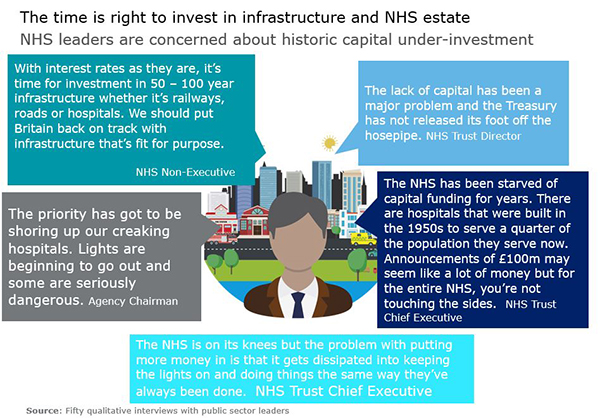 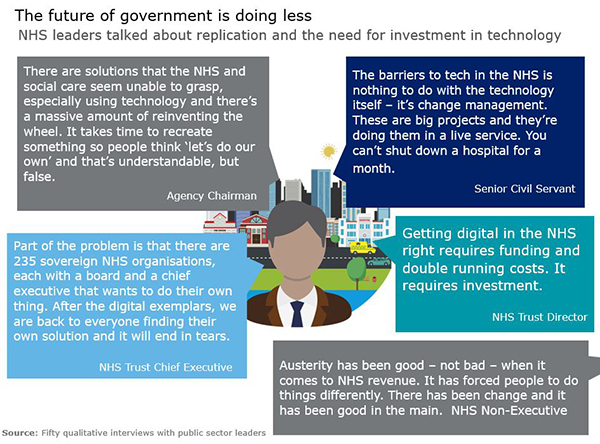 As far as social care was concerned, however, the concerns about the dire state of funding were unanimous: 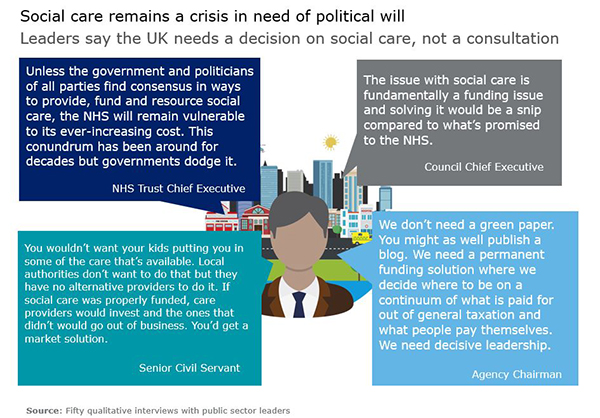 Overall issues that need to be addressed

Combining the findings from the three separate research strands offers important insight into issues that will need to be at the heart of a new domestic agenda, specifically:

In reflecting on the overall findings, one thing is clear: ministers and officials face incredibly tough decisions in matching their policy implementation to the expectations highlighted during the election. At the same time, there is now an opportunity for the government to chart a bold new course for public sector reform.