Most people will have been impacted by cancer in some way – whether themselves, a family member, a loved one or an acquaintance. Stories about the causes of cancer and examples of exciting new breakthrough treatments feature regularly in media headlines. However, one issue more than any others attracts attention, and that’s evidence of inequalities in patient outcomes. Last week’s World Cancer Day, on 4th February, coincided with the publication of the CONCORD-3 report, comparing the outcomes for cancer patients from 73 different countries over the period 2000-2014.1 This week’s blog reflects on some of the developments in the UK given the results of this ground breaking research suggests that the UK continues to lag behind many other comparable European countries.

About the Concord research programme

CONCORD is an international scientific collaboration, led by the London School of Hygiene & Tropical Medicine, designed to monitor trends in the survival of cancer patients world-wide and enable a comparative evaluation of the effectiveness of health systems in providing cancer care. The research is also used to contribute to the evidence base for national and global policies on cancer control. The third report, was published in the Lancet in January 2018, and is based on an analysis of the clinical records of over 37 million patients from 71 countries, diagnosed with one of 18 types of cancer (2000-2014).2

The CONCORD-3 study, found that although cancer survival has generally increased, even for some of the more deadly cancers such as liver and lung, survival trends vary widely. Moreover, there are wide and persistent disparities between countries, particularly for some childhood cancers. The research considers that this is largely due to the availability and quality of diagnostic and treatment services.

UK performance in the CONCORD 3 analysis

In the UK, the results from the latest survey show that overall cancer survival is improving, with several cancers showing substantial increases in five-year survival, including breast (80% to 86%), prostate (82% to 89%), rectum (55% to 63%) and colon (52% to 60%); reflecting better cancer management. However, adults with cancer continue to have lower five-year survival than in many other comparable countries for several common cancers:

While this analysis of UK performance does raise some important questions, the governments in all four UK countries have recognised this and over the past decade and a half have published numerous national strategies and actions plans. For example, in England the first National Cancer Plan was published in in 2000 followed by the Cancer Reform Strategy in 2007.6 Over the past decade specific funding has also been provided for investment in innovative diagnostic and treatments.

The most recent strategy was published in July 2015 by an Independent Cancer Taskforce - Achieving world-class cancer outcomes: a strategy for England 2015-2020.7 And in 2016 the National Cancer Transformation Board published a wide range of specific steps designed to increase prevention, speed up diagnosis, improve the experience of patients and help people living with and beyond the disease.8 Indeed, the Department of Health and Social Care has said that cancer remains a priority, noting that survival rates are at a record high, with 7,000 more people surviving cancer compared with three years ago. Indeed, across all main cancers, five year survival have improved in the past decade (see Figure 1). 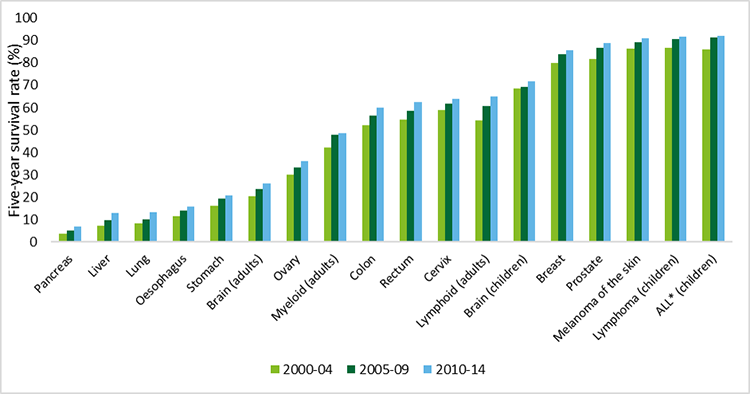 Despite the numerous initiatives and strategies aimed at improving the UK’s cancer survival rates including improving access to earlier diagnosis, improving access to surgery and radiotherapy, and tackling health inequalities through targeting primary prevention and public health; research, like the CONCORD-3 study, continue to show inequalities in cancer outcomes in comparison with other countries.

A key initiative is the availability of national screening programmes and the UK currently offers three screening programmes for bowel, breast and cervical cancer. However recent reports show that these programmes are not being fully utilised. For example, the percentage of women taking up invitations from breast cancer screening was at the lowest level in a decade in 2017, dropping to 71 per cent of women.10 Furthermore, additional data from 2016-17 showed that over 1.2 million women in the UK (25 per cent of the eligible population) did not take up their invitation for cervical screening.11 These reports are worrying, and they suggest that women may not be receiving the information or support needed to make the correct decision for them.

If the UK is to improve its survival rates from these cancers in particular, then encouraging greater uptake of available screening programmes needs to be a priority. Indeed as we showed in a report ‘Working differently to provide early diagnosis: Improving access to diagnostics’12, earlier diagnosis is the most important factor in improving cancer outcomes. This is particularly evident when we consider breast cancer as an example – the five-year survival rate for breast cancer diagnosed at stage I is 90 per cent, but this drops drastically to just 13 per cent when diagnosed at stage IV.13 The need for earlier diagnosis has clearly been recognised and the NHS has announced plans to employ more cancer specialists to speed up diagnoses as part of Health Education England’s new Cancer Workforce Plan.14 Ultimately, while the UK has made progress in improving its cancer survival rates in recent years, one fact remains, it still lags behind many comparable European nations, suggesting a more radical refresh of its approach may be necessary.

Matthew is a Research Analyst at Deloitte’s UK Centre for Health Solutions, the independent research arm of Deloitte LLP’s healthcare and life sciences practice. He supports the Healthcare and Life Sciences practice by producing independent and objective business research and analysis into key industry challenges and associated solutions. Matthew’s previous experience is in market research and he has authored a number of reports on the current and future landscape of healthcare and pharmaceutical markets. Matthew holds an MSc in Immunology from King’s College London.