Regulators are turning increasingly to formal accountability regimes for individual board members and senior managers. In line with this trend, the European Commission (the Commission) has, in its recent consultation on the implementation of Basel III reforms, raised the possibility an “accountability regime” under the CRD. Citing the Financial Stability Board’s 2018 toolkit on mitigating misconduct risk, which observes that “accountability can be reinforced by clearly identifying key responsibilities and assigning them to individuals” the Commission says it is “important to reflect” on whether the CRD could include a requirement for firms to define clearly the roles and responsibilities of each member of the management body and key function holders.

Although high-level, the consultation gives some clues as to the Commission’s thinking on the potential scope and features of an accountability regime.  It can immediately be seen that there appear to be several prima facie parallels with the SM&CR in the UK:

The Commission is seeking views on the “benefits and drawbacks” of an accountability regime whereby the management body1 would be required to produce statements of responsibility for each of its members identifying the activities for which they are responsible, beyond their membership of certain committees (e.g. the risk committee).

Statements of responsibility are a common feature of accountability regimes globally2. They record formally the allocation and apportionment of responsibilities amongst board members and senior managers making it easier to ensure that an individual can be identified and held accountable for any failings in their areas of responsibility.

Importantly, the Commission has not restricted the scope of the potential regime to the management body and is also seeking views on “benefits and drawbacks” of designing a similar regime for key function holders.

The consultation does not set out who might be considered a key function holder. However, European Securities and Markets Authority/European Banking Authority guidelines on the assessment of suitability define key function holders as “persons who have significant influence over the direction of the institution, but who are neither members of the management body and are not the CEO”. They may include the heads of internal control functions and the CFO (where they are not members of the management body); and heads of significant business lines, EEA/EFTA branches, third country subsidiaries and other internal functions.

Conclusion: change may well be coming, but it would be premature to conclude that a pan-European SM&CR regime is in prospect.

The Commission’s decision to consult in this area reflects an increasing global regulatory appetite to hold senior individuals to account (see Appendix A for more detail). That said, we think it is too early to assume that the Commission is intent on replicating an accountability regime such as the UK’s SM&CR across the whole of Europe. Notably, the consultation observes that defining the roles and responsibilities of members of the management body and key function holders “could also help to make fit and proper assessments by firms and competent authorities more informed and targeted”, indicating that the Commission may see its proposals for accountability more as an enhancement to the fitness and propriety regime than as a stand along regime on the model of the UK’s SM&CR.

Nevertheless, the proposals are clearly consistent with a wider regulatory direction of travel and so boards may wish to give preliminary consideration to the longer term implications of this trend for their governance and management arrangements.

Appendix A: Why are regulators pursuing accountability regimes?

Following the global financial crisis and subsequent string of misconduct episodes, a common complaint is that too few senior executives have been held personally accountable for management failings. Conscious that senior individuals can avoid accountability “by claiming ignorance or hiding behind collective decision-making”3 regulators have sought, increasingly, to clarify the allocation of responsibilities amongst firms’ senior decision makers. 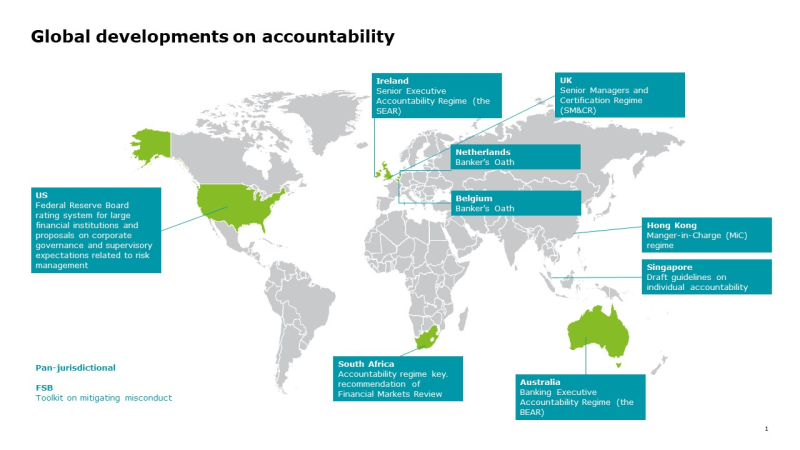 1According to Article 3, point 7, of CRD IV “management body” means “an institution's body or bodies, which are appointed in accordance with national law, which are empowered to set the institution's strategy, objectives and overall direction, and which oversee and monitor management decision-making, and include the persons who effectively direct the business of the institution”.
2For example, statements of responsibility (or similar) are required under the UK’s SM&CR, the Australian Banking Executive Accountability Regime and the incoming Irish Senior Executive Accountability Regime.
3Parliamentary Commission on Banking Standards, 2013

Andrew Bulley joined Deloitte in October 2016 from the Bank of England, where he was, most recently, the Director of Life Insurance Supervision.  Between 2014 and 2016 he was a UK voting member of the Board of Supervisors of the European Insurance and Occupational Pensions Authority (“EIOPA”).  In a career with the Bank of England and Financial Services Authority stretching over 27 years, Andrew has held senior roles in the supervision of life and general insurers, the London wholesale insurance underwriting and broking markets, retail and investment banks, asset managers, and IFAs.

David is Head of Deloitte’s EMEA Centre for Regulatory Strategy. He focuses on the impact of regulatory changes - both individual and in aggregate - on the strategies and business/ operating models of financial services firms. David joined Deloitte after 12 years at the FSA, where in his last role, Director of Financial Stability, he worked on the division of the FSA into the PRA and the FCA.

Orla is a Senior Manager in Deloitte’s Centre for Regulatory Strategy where she focuses on Conduct Regulation. She has extensive experience of working with financial services firms to help them understand the strategic and operational implications of changes to conduct regulation. She joined Deloitte in June 2017.

Scott is a Senior Manager in the Centre for Regulatory Strategy advising on international banking regulation, with a particular focus on bank capital, strategy, cyber risk and public policy-making processes. Scott is also the host of Deloitte's financial services podcast Regulated Radio. Before joining Deloitte in 2015, he worked in Brussels as an EU regulatory strategist advising a number of global banks and other financial institutions. He is a graduate of the London School of Economics and previously worked as a political advisor to Canada’s Minister of Finance and Minister of Foreign Affairs.