The IAIS has recently kicked off1 the final year of field testing of its Insurance Capital Standard (ICS), which it is scheduled to adopt at its Annual Conference in November 2019. This blog is part of a two-part series examining the calculation of market-consistent technical reserves in the ICS, which is one of the most important points of valuation methodology for a market-consistent regime.2 In doing so, it draws comparisons with the experience of Solvency II. As it develops the ICS, the IAIS is tackling many of the same policy issues that have already been faced by Solvency II, and how it approaches these issues could prove to be important in the context of the 2020 Solvency II review.

This blog examines the calculation of the respective regimes’ long-term discount rates and concludes that:

In each of the areas covered by these connected blogs, the 2019 field test is the last opportunity for the IAIS to test its narrowing policy choices before finalising the ICS that it will put to adoption at its Annual Conference. 2019 is thus the last year in which the ICS can be influenced through participating in field testing.

The ICS is testing a number of policy approaches that could well have implications for the 2020 review of Solvency II currently underway. Insurers with an interest the future shape of Solvency II and the ICS would thus be well-advised to participate in field testing if eligible, as well as engaging in any associated consultations.

Field testing is scheduled to run until the end of July.

Both the ICS and Solvency II value technical provisions as the sum of a best estimate and risk margin – in Solvency II terms the premium over the mean valuation that an arm’s length purchaser would require to take on the portfolio of liabilities. The calculation of appropriate long-term discount rates to be used in this valuation is thus a critical input for long-term business.3

On long term discount rates, the IAIS’s risk-free rate methodology for field testing is conceptually similar to Solvency II. It produces discount curves that are, broadly, similar to their Solvency II equivalents. However, comparing the curves applied for 2018 and 2019 field testing nonetheless suggests some variability between the regimes that could lead to material differences in valuation.

The charts below compare the risk free curves for the euro and sterling used for ICS 2019 and 2018 field testing with those published by EIOPA for Solvency II for the same reference dates, in each case showing both base and volatility-adjusted curves.4

The following can particularly be noted about the respective curves:

In summary, respective discounting approaches between the ICS and Solvency II could well drive differences in valuation or volatility. Any divergence in key assumptions and methodologies, in particular long-term rate, convergence, and curve adjustments, could ultimately lead to highly significant differences in valuation between the ICS and Solvency II for some insurers. 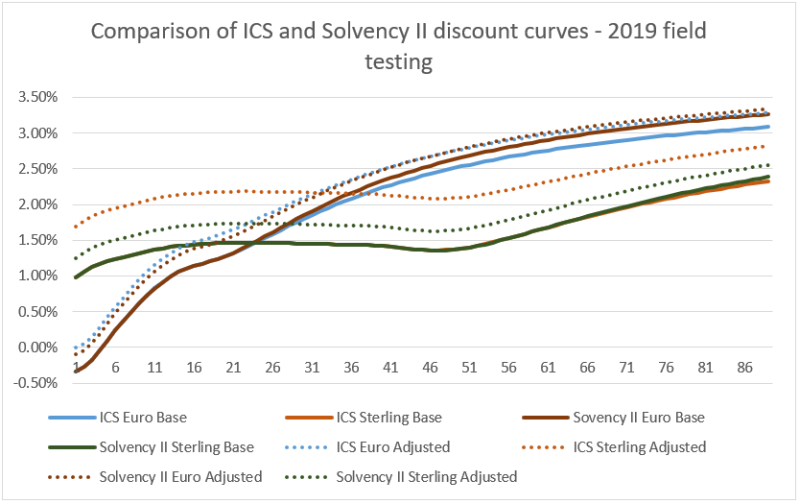 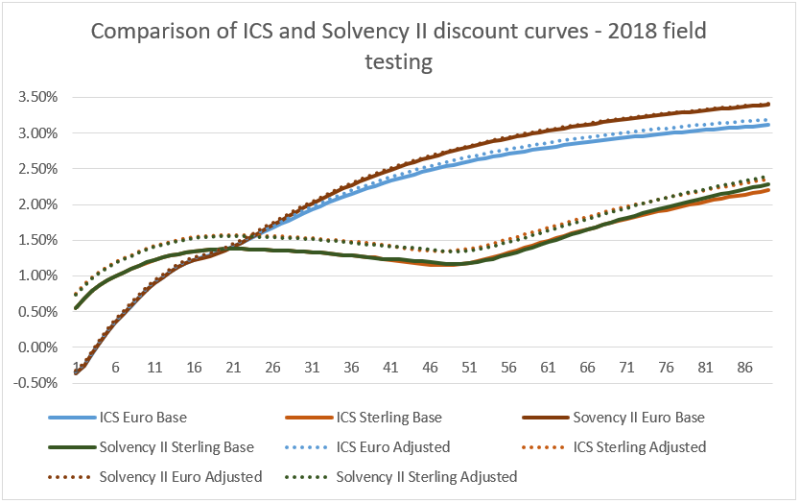 2 The calculation of regulatory capital requirements is also, of course, of critical importance.

3 This blog does not consider further the calculation of the best estimate by insurers. The best estimate is calculated for both Solvency II and the ICS as the probability-weighted average of the present value of future cash flows, calculating using the relevant prescribed risk-free interest rate term structure.

5 The above, also, does not consider any change in the IAIS’s approach to calculating the general bucket adjustment between 2018 and 2019 field testing, which may stabilise in the final ICS approach.

6 Solvency II risk-free curves are currently calculated based on market swap rates linked to LIBOR for sterling and EURIBOR for the euro. In previous field testing exercises, the IAIS has calculated the ICS curves by reference to the same benchmarks.

Andrew Bulley joined Deloitte in October 2016 from the Bank of England, where he was, most recently, the Director of Life Insurance Supervision. Between 2014 and 2016 he was a UK voting member of the Board of Supervisors of the European Insurance and Occupational Pensions Authority (“EIOPA”). In a career with the Bank of England and Financial Services Authority stretching over 27 years, Andrew has held senior roles in the supervision of life and general insurers, the London wholesale insurance underwriting and broking markets, retail and investment banks, asset managers, and IFAs.

Henry specialises in regulation in the insurance sector. Henry has advised many insurers across the life, non-life and health sectors on the impact and implementation of regulatory change, and has particular expertise in capital, solvency and regulatory reporting. Henry’s experience includes advising on regulatory strategy during times of major business or regulatory change, for example acquisitions and business restructurings. Henry has worked in Europe and the United States, and is a Chartered Accountant.