MiFID II took seven years from consultation to implementation and generated 30,000 pages of rules.1 Nine months have passed since the go-live date on 3 January. Firms could be forgiven for finally wanting to tick it off their “To Do” lists. However, they can’t take that red pen out yet – we haven’t yet reached our destination on the MiFID journey. As with all things regulation, there is always more to do. And where there are rules, more often follow.

Our Financial Markets Regulatory Outlook 2018 mid-year update took stock of capital markets developments under MiFID II as of the first half of the year. Based on regulatory publications and statements, this blog highlights (i) the key areas of MiFID II on which supervisors are expected to focus (which may be subject to change); (ii) areas where revisions to MiFID II are already planned or underway; and finally (iii) areas where medium-term revisions to MiFID II are possible. We do not look at outstanding areas of MiFID II that are still being implemented. 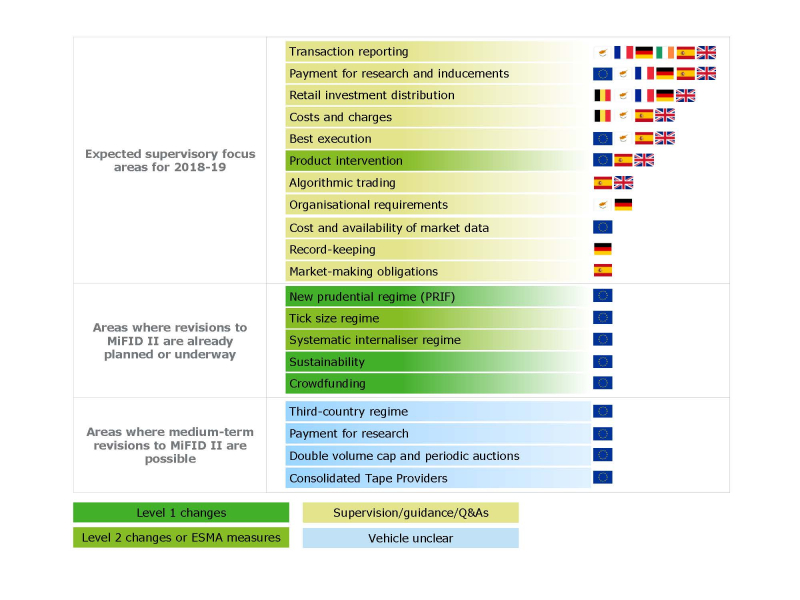 We have undertaken a review of planned MiFID II supervisory activities for 2018-19 across ten EU countries, as well as the European Securities and Markets Authority (ESMA). We identified eleven supervisory priorities across the different countries,2 with many of the topics being looked at by regulators in more than one country. Taking the top spots in terms of the number of regulators focusing on them were transaction reporting and payment for research and inducements. In next place was retail investment distribution (covering areas such as suitability, appropriateness, client reporting and product governance).

The diagram above provides an overview of the MiFID II supervisory topics being looked at by ESMA and in the ten EU countries we surveyed. Further detail on each country’s planned supervisory activities can be found in the Annex.

Areas where revisions to MiFID II are already planned or underway

Areas where medium-term revisions to MiFID II are possible

MiFID I was covered in a relatively modest 44 pages of Level 1 text, while MiFID II took 30,000 pages. Going by that trajectory, how many more pages of rules, guidance and Q&As may emerge in future? The MiFID journey continues.

David is Head of Deloitte’s EMEA Centre for Regulatory Strategy. He focuses on the impact of regulatory changes - both individual and in aggregate - on the strategies and business/ operating models of financial services firms. David joined Deloitte after 12 years at the FSA, where in his last role, Director of Financial Stability, he worked on the division of the FSA into the PRA and the FCA.

Matt has over ten years of financial services experience. As part of the Deloitte Risk Advisory team, he has led multiple engagements focusing on regulatory change and wider conduct. Prior to joining Deloitte, he was a derivatives trader focusing on European interest rate futures.

Coco is an Assistant Manager in Deloitte’s EMEA Centre for Regulatory Strategy, where she works on capital markets and insurance regulation. She joined Deloitte in 2016 after graduating from the University of Cambridge, where she focused on International Development. She has previous experience working in enterprise risk services and at a non-governmental organisation.