Earlier this year1 we shared our comments on the level of provisioning seen in Europe’s largest banks (by balance sheet size)2, based on the 2015 reporting year. Following the settlement of a number of high profile financial services disputes and fines imposed by the US Department of Justice, we have now updated our findings for the most recent reporting period. Has the trend we saw up until 2015 – of ever increasing provisions – continued?

We plot below the normalised average level of provisioning taken by the ten banks. When presenting provisions in Euros (shown in blue below) the figures suggest that provision levels might actually have started to decrease. However, reporting in Euros ignores the “Brexit effect” on the EURGBP rate, which has the effect of reducing the provisioning made by those UK banks which report in Sterling. The adjusted figures using a pre-Brexit EURGBP FX rate from December 2015 (shown by the green dash line) indicate that 2016 reporting numbers in fact remain similar to 2015 numbers. 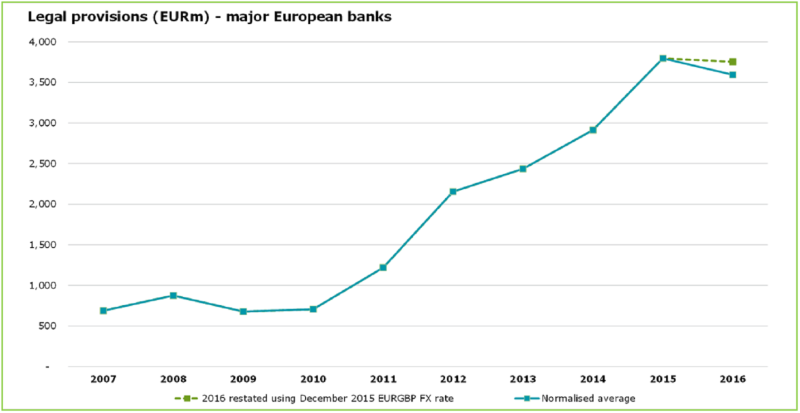 The issues for which European banks have made provisions, such as commodities manipulation, benchmark rigging and wholesale and retail mis-selling, have not changed significantly from our previous analysis. We continue to see more reference in financial statements to topics affecting wholesale rather than retail markets. Notwithstanding this bias, the near plateau seen in the graph above (as opposed to a continued upward trajectory) is largely the result of a fall in retail provisioning (heavily influenced by lower overall PPI provisions).

While the figures may indicate a plateau has been reached, the willingness of authorities to continue to investigate past events and the continuing resolution of legacy issues such as PPI may mean that there will be no significant fall in provisioning for some time yet.

Themes for the future? A look at the FCA’s business plan for 2017/18 indicates a number of issues which are currently on the regulator’s radar: for example, some car financing schemes have been flagged as lacking transparency, with potential conflicts of interest and irresponsible lending in the industry risking harming consumer interests. Robo-advice is another area which is under scrutiny, with the suitability of the advice being provided coming into question. Any investigations into these areas are in their infancy and so we would not imagine they will result in material provisioning in the near term (if, indeed, at all) but we are keeping a keen eye on them to see how they progress.

Looking further ahead, Brexit poses a big challenge: there are more than 12,000 EU regulations and 7,900 statutory instruments which implement EU legislation, so laws must be passed to prevent legal black holes once the UK withdraws from the EU. The inevitable complexity of such reforms and new regulations in capital markets may lead to issues further down the line if firms struggle to comply. Brexit, and its inherent uncertainties, may therefore be the source of future provisioning decisions as banks provide for issues at present difficult to predict.

[1]http://blogs.deloitte.co.uk/financialservices/2017/02/bank-provisions-an-unavoidable-legacy.html
[2]Based on the rankings provided by http://uk.businessinsider.com/sp-global-biggest-banks-in-europe-2017-4/#22-commerzbank-germany-5067-billion-1. As in our previous analysis, one bank in the top 10 has been replaced with another (11th largest) as the data relating to legal provisions in the Bank’s annual report is not comparable with the other banks in the population. We present the normalized average calculated after removing the largest and smallest outliers.

Mark is a Partner in the Banking and Capital Markets Audit Group and a member of the FS Disputes leadership team. Over the course of his 14 years at Deloitte, Mark has audited a range of investment and retail banks. He now applies his deep banking industry and technical expertise to assist clients in a variety of contexts; in particular, in a series of investigations and disputes in the banking sector, as well as with wholesale markets remediation and reform.

Amber Andrade is a forensic accountant and Director at Deloitte Forensic, specialising in FS disputes. In her ten years at Deloitte she has focused on multi-jurisdictional, high value disputes and investigations, many involving complex financial products. Her disputes experience ranges from assisting clients in assessing the commercial and financial merits of any potential claim, through to leading expert teams in UK High Court expert witness appointments.

Gabriela is a Manager in the Banking and Capital Markets Audit Group and a member of the FS Disputes team. Gabriela joined Deloitte in 2012, following a career in Investment Banking, and has since applied her broad experience and knowledge of derivatives and structured products to a wide range of projects, such as market misconducts, remediation and disputes. Her disputes work includes providing litigation support in a variety of complex expert witness engagements.