Deloitte’s report “Marketplace lending – a temporary phenomenon?” explores whether marketplace lenders (MPLs) represent a truly disruptive threat to the UK banking industry. As part of our research, we commissioned YouGov to carry out a survey of individuals and small and medium-sized enterprises (SMEs) to find out more about the awareness, usage and growth potential of marketplace lending in the UK.I

Where does the money go?

We asked both individuals and SMEs in the UK who had borrowed from an MPL what they intended to use the funds for. Consumers predominantly use MPL loans to buy cars and to pay down other, more expensive loans. SMEs mostly use their loans for capital expenditure, particularly project finance. 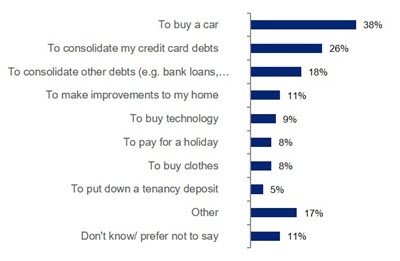 Source: YouGov plc 2016 © All rights reserved, Deloitte analysis
Base: All GB adults who have borrowed via the following peer-to-peer lending platforms (non-nationally representative), 66

How do MPLs fare?

The SMEs we surveyed in the UK told us that borrowing from an MPL was preferable to using credit cards or raising funds through venture capital and private equity firms. However, SMEs much prefer borrowing from a bank, either through the business or personally, to taking a loan via MPLs.

Borrowing from MPLs compared to other options*, SMEs 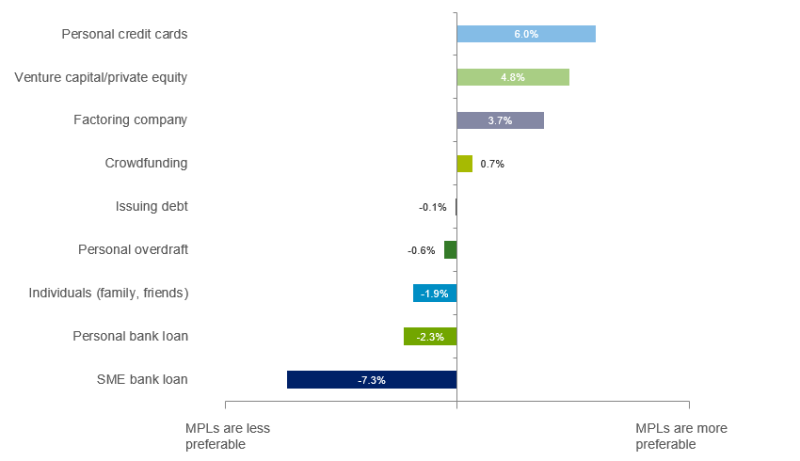 Investors, on the other hand, gave MPLs an NPS of just 1, with almost as many detractors as promoters. However, it is worth noting that this only includes retail investors; a significant and increasing share of funds lent via MPLs comes from institutional investors.

Eight per cent of UK SMEs aware of the service are likely to borrow in future, twice the proportion of those who have previously borrowed from an MPL.

These responses suggest that the sector could well double in terms of numbers of customers— individual and business—in the coming years in the UK.

Consumers who had previously borrowed through an MPL were attracted more to the customer experience of the platforms than the rates on offer. However, those likely to borrow in future are drawn to MPLs’ competitive interest rates above all else.

Individuals cited higher returns on offer compared with many other investment options as the main reason that they would consider investing via an MPL platform.

SMEs, by contrast, are more drawn to the convenience of using an online platform than the rates on offer when borrowing via MPLs.

YouGov asked those consumers and SMEs unlikely to borrow or lend via MPLs in future what it was that was putting them off. Unsurprisingly, the strongest inhibitor for potential investors was the risk of losing money. A lack of trust, security concerns, and unfamiliarity are key deterrents for individual and SME borrowers. Furthermore, SMEs are deterred from borrowing from MPLs by the lack of a prior relationship with one.

Reasons not to borrow from/lend through an MPL platform in the future*, retail consumers 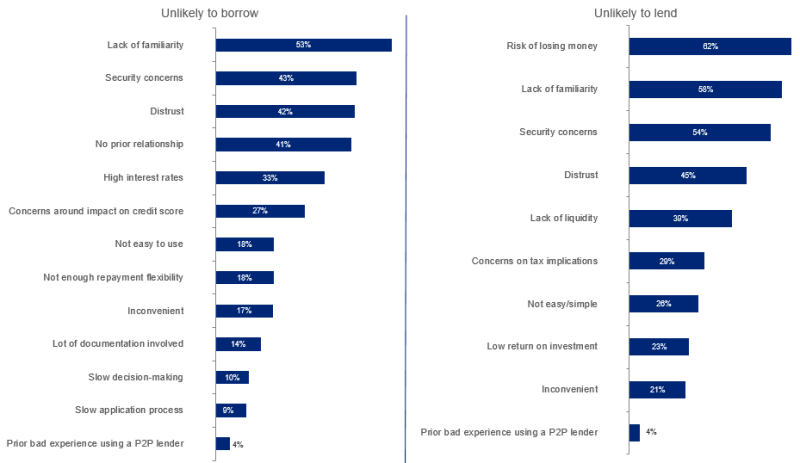 Source: YouGov plc 2016 © All rights reserved, Deloitte analysis
Base (borrowing): All GB adults unlikely to borrow via a peer-to-peer lender (993)
Base (lending): All GB adults unlikely to lend via a peer-to-peer lender (907)
*Respondents were asked to rate each factor from 1 to 5, where 1 was “Not at all applicable” and 5 was “very applicable”. The chart shows the percentage of respondents selecting 4 or 5 for each factor

What can UK MPLs learn from this?

There is a high degree of customer awareness of MPLs in the UK, with one in two consumers and three in four SMEs aware of marketplace lending. However, they are not doing so well in converting this awareness into use: only a small fraction of these have actually used MPL platforms to borrow or lend funds. A significant proportion of the population are put off by a lack of trust and familiarity.

MPLs’ should exploit their market-leading user experience to enhance customer “stickiness”, and boost word-of-mouth recommendations to expand their customer base.

In turn, these benefits should help to decrease customer acquisition costs, making MPLs a more viable proposition. Moreover, as more MPLs become fully authorised by the FCA, inhibitors such as trust and security concerns may subside.ii Banks could then be increasingly open to partnering with them.

Since Margaret joined Deloitte in 2012, Margaret’s team has published reports on deleveraging, culture, talent and technology in banking, on the impact of the Retail Distribution Review on investment products and advice, and on regulatory strategy in insurance. She started her career as a strategy consultant with McKinsey & Company before moving into financial journalism. She wrote for The Economist, The Daily Telegraph and Reuters Breakingviews, and edited Global Agenda, the official Davos magazine. Alongside this, she presented many top BBC radio programmes, including Today, and has been a frequent commentator on financial and current affairs, most frequently on BBC1, BBC News and Sky News. She was interviewed by Jeremy Paxman on Newsnight and has also spoken at, or chaired, conferences for a variety of organisations including: Economist Conferences, the European Commission, the Financial Services Authority, Holland Financial Centre, Enterprise Ireland, Allen & Overy, ING, Procter & Gamble, the Insurance Institute of Ireland and Trinity College, Dublin. She was an Entrance Exhibitioner and Foundation Scholar at Trinity College, Dublin and a Fulbright and Baker Scholar at Harvard Business School (HBS). She serves on the HBS European Advisory Board.

Cem Turan is a Manager and Head of Retail Banking Insight at Deloitte UK. Cem has an MBA in Finance from the University of Pittsburgh and a Bachelor's in Economics from Pennsylvania State University. A native of Istanbul, he is fluent in English and Turkish as well as conversant in German and Italian. In his current role Cem is working to drive development of pan-European thought leaderships on retail banking and fintech.

i Deloitte constructed two questionnaires around the awareness, usage and potential future usage of marketplace lenders – one for consumers and one for SMEs, using YouGov as the source research agency. All figures, unless otherwise stated, are from YouGov Plc. Total sample for the consumer survey was 4,296 (weighted to all GB adults aged 18+), and for the SME survey this was 1,671 (weighted to all SME senior decision makers). Fieldwork was undertaken between 12th - 20th January 2016. The survey was carried out online.
ii Marketplace lending – a temporary phenomenon?, Deloitte, 2016, pp. 18-19. See also: http://www2.deloitte.com/uk/en/pages/financial-services/articles/marketplace-lending.html