On Sunday the much-anticipated announcement from the European Central Bank (ECB) on the result of its Comprehensive Assessment was released. The exercise, which was an in depth review of the quality of the largest European banks' assets that included a review of asset quality and a stress test, has occupied the attention of banks over the past several months. Its completion is a significant milestone and a watershed moment for the Single Supervisory Mechanism (SSM), which formally opens for business on 4 November.

The headline results from the exercise capture banks’ performance against capital thresholds set down by the ECB, and the European Banking Authority (EBA), which was responsible for the stress test. As anticipated, several banks (25 in total) have been found wanting. Nine banks from Italy, three from Greece, three from Cyprus, two from Slovenia, two from Belgium and one each from Austria, Ireland, Spain, Portugal, France and Germany respectively. In aggregate the exercise revealed an overall capital shortfall of EUR24.6 billion in the adverse stress scenario across the banks in the sample.

| CA Results analysis tool: Compare the results of the Comprehensive Assessment by Country or bank to the main results data. |

For the banks that failed the exercise, the immediate question is whether steps taken so far in 2014 to remedy concerns about their capital position are enough, or whether more action is required. Some of the options that might be considered, such as the sale of businesses, portfolios or further cost reduction, are difficult to mobilise quickly. In the absence of concrete actions, how effectively those banks communicate their plans over the next few days will be key. The graph below provides an overview of Capital Shortfall as of December 2013 and the current Capital Shortfall after the banks took some action during 2014. As you can see below the Banks have shortfalls that remain unaddressed totalling EUR9.47 billion. 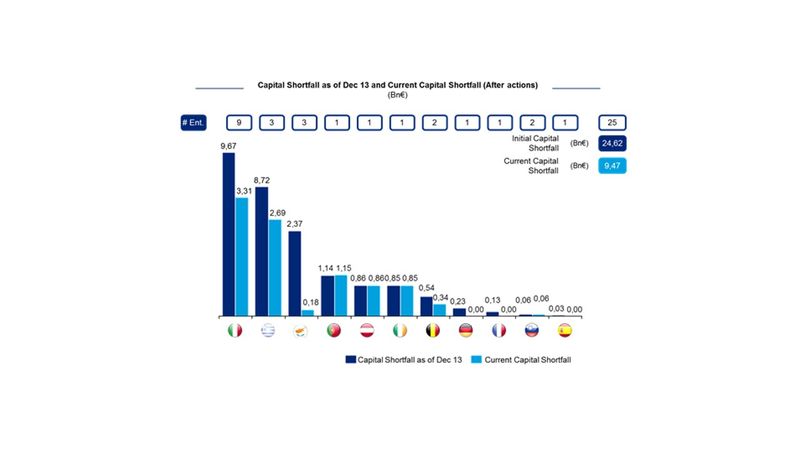 Few banks come away from the exercise unscathed. Non-Performing Exposures (NPEs), a measure of loan quality, were overall 18.3% (EUR136 billion) higher than previously reported, suggesting there is some way to go to resolve financial challenges in Europe.

This adjustment was driven by the application of a harmonised non-performing definition across the SSM, which led to EUR55 billion in additional NPE, and by the credit file review exercise (following harmonization of NPE definition) which triggered an additional NPE of EUR81 billion.

The exercise has also highlighted particular weaknesses in data quality and collateral performance that many banks will now be tasked by supervisors to address. Those remediation programmes will need to be run alongside the myriad of other regulatory projects already in train at most banks.

What happens next
The Single Supervisory Mechanism (SSM) opens for business on 4 November. For months, supervisors, and banks have been preparing for the transfer of prudential supervisory responsibilities to the ECB. The ECB will introduce new terms of engagement: higher standards than some banks have been used to in the past; greater standardisation of approach; and a change in perspective. The new regime will herald changes and those changes will create challenges for firms.

The Deloitte Banking Union Centre in Frankfurt
The Banking Union initiative represents a fundamental redesign of the supervision of the financial sector and will have significant consequences for European integration, as well as for the structure of the banking sector. For this reason, Deloitte has established the Baking Union Centre in Frankfurt, a powerful pan-European resource to meet clients’ needs and requirements. For more information www.deloitte.com/bankingunion.

Article authors and contacts from The Deloitte Banking Union Centre in Frankfurt:

Dan Keeble
Dan leads the Financial Instruments, Treasury and Securitisation Practice in London as well the EMEA Securitisation group. Dan also is a board member of the Association of Financial Markets in Europe. Dan has worked extensively with several NCAs, as well as the ECB, including Troika work in Ireland and Cyprus, and is a qualified chartered accountant (ACA).

Will Newton
Will leads the Financial Institutions team within Restructuring Services; he also co-leads the EMEA SSM Asset Quality Review (“AQR”) Coordination team and is a member of the firm’s EMEA Banking Union Steering Committee and the Centre for Credit Excellence. Will has 26 years’ experience as a senior banker and advisor working in the UK, Western Europe, CEE/CIS and Asia.

Ricardo Garcia
Ricardo is a Senior Manager in the UK Banking and Capital Markets practice. Ricardo has over eight years of experience in the field of risk management and securitisation work. He specialises in structured finance transactions, with a particular focus on the global corporate debt markets. In the last year Ricardo worked with the central Comprehensive Assessment (AQR/ST) leadership team coordinating the new Comprehensive Assessment exercise undertaken in the most significant banks in the Eurozone.