Cathy Li joined Deloitte’s Tax team as an Analyst last month, but that’s not the only place she shines. She’s also a youth advocate for sustainability and volunteers with a range of different organisations to help combat climate change. As a government appointed UK ambassador for the UN Climate Change Conference (COP26) in Glasgow this week, she explains why the topic is so important to her generation. 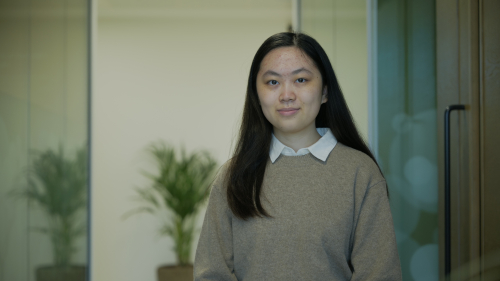 Like many people her age, Cathy became aware of the impacts of climate change as a child. “When I was growing up it was always in the news and we learned a lot about it, more so than older generations,” she explains. “Younger people are going to be more impacted than anyone else by climate change so it’s really important that our voices are heard.”

At university she began reading about the UN’s efforts to tackle the ongoing crisis, and became interested in the relationship between technology and sustainability. In 2020, she was nominated to speak at the 16th Meeting of the Climate Technology Centre and Network Advisory Board of the UN Framework Convention on Climate Change (UNFCCC). “I had the opportunity to speak on behalf of three stakeholder groups, including youth, women, and indigenous peoples. It was so exciting to be able to represent these groups and engage with a topic I’m passionate about,” she says. Although much of the content was complex, it sparked Cathy’s curiosity and she was keen to find out more. She’s since represented youth and women constituencies in various UNFCCC meetings. “I absolutely love getting to engage with young people from across the world and finding out what they feel is important and what change is needed,” she says. “It means I’m in a position to feedback that advice in my interventions in UNFCCC meetings.”

Cathy joined Deloitte after graduating in September, and is looking forward to continuing her voluntary work alongside her new job as a tax analyst. “I have always had an interest in numeracy and finance. I’m a big fan of Excel too and when I studied tax at university, I realised I quite enjoy it,” she says. She was introduced to the firm through a mentorship programme at university, which inspired her to accept the post-graduation job offer. “I realised it was a huge company covering lots of different areas, including climate change,” she says. “My colleagues have been really friendly and supportive and it’s a great place to work so far. I love that I’m able to combine my interest in tax with my passion for tackling climate change.”

This November the firm is supporting her to take some time off to attend the UN Climate Change Conference, where she will be serving as an ambassador. Cathy will be speaking at more than a dozen events, hosted by corporate companies, international organisations and UN agencies. “I’ll also be following the negotiations, which I find really interesting,” she says. “I’m looking forward to my speaking engagements, but also meeting up with people from across the world who are attending the conference.”

As she continues to volunteer at UN events in a personal capacity, Cathy is also keen to support Deloitte’s ongoing sustainability efforts. “We have passionate climate teams and mandatory climate training for all our colleagues,” she says. “Climate change isn’t reserved for specialist teams only, it’s something that every service line tries to take into consideration. Clients are also asking more questions than ever and working out how they can integrate sustainability into the work they’re doing.” Cathy believes this is “crucial” for supporting real, positive change. “Making a difference isn’t just about the efforts of the government, it has to be jointly supported by private companies and the civil society stakeholders. We all have a critical role to play.”

Backed by John Egan, the People Partner in her team, together with other colleagues in the tax and climate teams, she’s determined to use her expertise to help build a brighter future for Deloitte. “My team has been incredibly supportive of my volunteer work since I started. Everyone has been friendly and welcoming and colleagues have shown a great interest in what I’ve been doing. They’re really keen for me to support the climate change teams at the firm as well.”

For Cathy, ‘climate technology’ will be a key facilitator for good practices, and she’s excited to see how it develops. She also believes that increasing diversity in tech and sustainability policy, as well as implementation, will play a key role in supporting our fight against climate change. “Prompt and responsible representation of women, indigenous peoples and youth at the table is key, as we all need to work together for change. Everyone brings a unique perspective and knowledge and we need to facilitate this to support our goals. That’s why I’m so honoured to have been representing these stakeholder groups and make sure these voices are heard.”

Keen to find out how we’re supporting sustainability goals? Meet our Climate team and discover how they’re making a difference here.

Feeling inspired? Join us, and discover the impact you could make here.