Here at Deloitte we have a really active sailing club and each year in April, we hold our annual spring regatta. We charter 20 boats for the weekend and encourage both experienced sailors and novices to get out onto the water.   On each boat we have an experienced skipper plus two experienced crew members who act as hosts. There’s room for eight people on each boat and the rest of the places are open to people with little or no experience of sailing. I’ve been one of the experienced crew members for several years now and always look forward to meeting new people and sharing my passion for sailing with them.

Most years we get lucky with clear blue skies and sunshine but this year the weather on the Saturday was a bit grey and cloudy. It did mean that there was a nice steady wind though it was rather chilly as it was coming from the north – hence the need to be wrapped up in full wet weather gear! 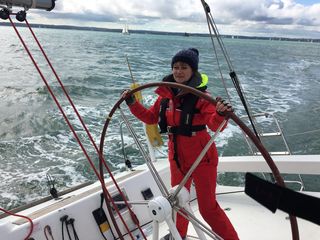 We spent Saturday morning teaching the newbies the basics of sailing and putting these new skills into practice. In the afternoon we had a treasure hunt so were given a chart showing all the buoys between the south coast and the Isle of Wight. The buoys had different points values and we had to plot and sail a course with the aim of collecting as many points as we could in the three hour time limit. We had a fun afternoon with plenty for everyone to do - whether it be navigation, helming, trimming the sails or simply sitting on the rail (a really important job when you are sailing upwind in heavy weather!).

In the evening, all 160 of us went for a group dinner in the Royal Corinthian Yacht Club and most of us then followed this with a few beers in a local hostelry. The next morning, Poppy, our social secretary bravely volunteered to be hoisted up one of the masts to get this great shot of us in Cowes Marina. 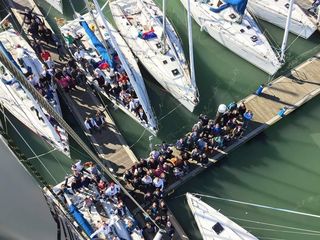 On Sunday the sun came out and they organised a couple of short races for us – some of which involved downwind meaning everyone got the chance to put their spinnakers up. Over the years the sailing club has invested in some Deloitte branded spinnakers and it’s a great sight to see one of these sailing majestically along with Cowes and the Isle of Wight in the background. 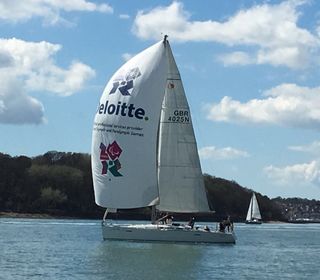 For those that get the sailing bug, there are other opportunities throughout the year, one of which is Cowes week. We usually have a few boats out and invite our clients to join us which is great for building relationships and giving them the chance to experience some full on racing in the oldest and largest annual sailing regatta in the world. Cowes is in August so we enjoy the chance to put on our shorts rather than our wet weather gear!