Since its introduction IFRS 9 has caused considerable interest, especially with respect to the potential volatility that it may cause.  How a firm’s ECL may change under different economic scenarios is important in understanding whether its estimates are “unbiased” (including whether an appropriate level of both upside and downside credit risk has been incorporated) and in understanding potential earnings (and capital) outcomes in different economic environments.

The interaction of the standard’s objective to “bring forward” future loan losses to today’s P&L with the non-linear1 impact a distressed economy can have on loan losses increases volatility compared to IAS39, where losses were booked only when loans went bad.  This means that if a firm’s view of the future economy deteriorates, and their expectation of future credit losses increases, a material P&L charge could be incurred today despite no cash losses having materialised.

Information touching on these areas is presented as part of “estimation uncertainty” disclosures in firms’ accounts under IFRS and also via regulatory stress testing disclosures.

Insight into sensitivity is obscured for some firms that are currently using large post model adjustments to reflect downside risk not currently being captured through their models or economic scenarios.  Comparison between firms is difficult because of differences in disclosure, differences in credit fundamentals (i.e. loan portfolio mix, credit management and recovery practices) and differences in models (i.e. modelling choices and the performance of those models).

Sensitivity disclosures are in the spotlight of analysts and regulators at the moment. We would expect a greater degree of consistency to emerge over time and expect the impending second DECL report to support that.

What sensitivity disclosure is required?

The requirements are set out in IAS 1 Presentation of Financial Statements:

An entity shall disclose information about the assumptions it makes about the future, and other major sources of estimation uncertainty at the end of the reporting period, that have a significant risk of resulting in a material adjustment to the carrying amounts of assets and liabilities within the next financial year.

Estimation uncertainty is not a defined term, but the standard explains how it can be disclosed:

The assumptions and other sources of estimation uncertainty […] relate to the estimates that require management's most difficult, subjective or complex judgements. […]

Examples of the types of disclosures an entity makes are:

(a) the nature of the assumption or other estimation uncertainty;

(b) the sensitivity of carrying amounts to the methods, assumptions and estimates underlying their calculation, including the reasons for the sensitivity….

Note that the report included other recommendations as well, but in this blog we will focus specifically on multi- and single-factor sensitivities.

What has been published? Multi-factor sensitivities

All major UK banks (other than those using monte carlo approaches) published a form of scenario-based sensitivity analysis. These disclosures present ECL at the reporting date under the assumption that 100% probability is assigned to a particular macroeconomic scenario. Below is how this disclosure was presented in the Barclays accounts: 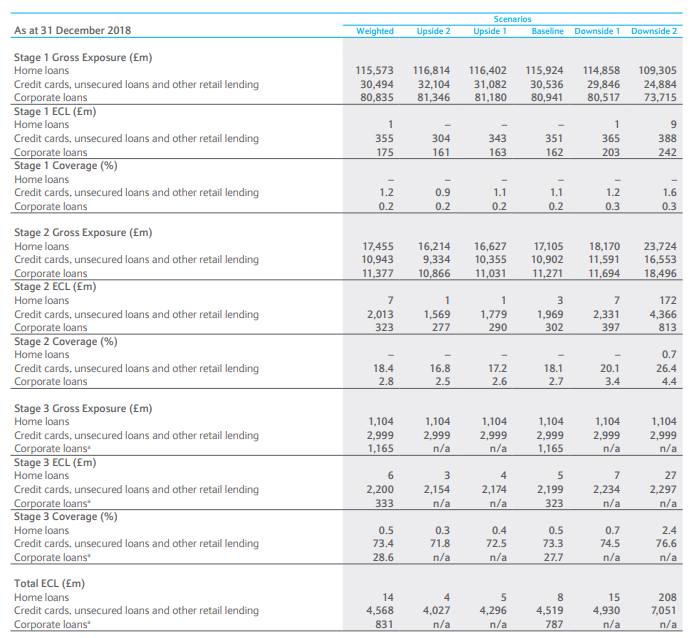 Most banks updated the allocation of exposures between Stages 1 and 2 for each specific scenario used in the sensitivity analysis (“re-staging”).  This is different to reported staging, which is based on weighted Multiple Economic Scenarios (MES).

For downside scenarios the ECL is higher because Probability of Default (PD) and Loss Given Default (LGD) were re-measured and because lifetime credit losses were recognised for additional accounts that were moved to Stage 2 based on the “forward look” which would have been considered as Stage 1 with only 12 months’ losses recognised for weighted MES.

This approach is similar to the BoE’s ACS stress test, where “perfect foresight” of a single distressed scenario is used throughout the stress, and results in a large increase in Stage 2 accounts on day 0 as the expected impact of the future economics is reflected in the “forward-look” aspects of staging. However, it differs to stress testing because firms have mainly reflected changes in the ECL model outputs rather than also flexing post model adjustments.  Because, in some banks, PMAs constitute a significant proportion of overall ECL, excluding them may represent a significant limitation of the sensitivity disclosures.

One consequence of “re-staging” is that it is not possible to recalculate the weighted average ECL in the financial statements from the outcomes of the individual scenarios.  This was highlighted by Barclays:

Some other banks did not “re-stage” (e.g. Lloyds) and all loans were treated as if they stayed in the same stage as the statutory results. This means that the disclosure does reconcile to the reported statutory numbers and will give a structurally lower sensitivity for downside scenarios compared to firms that re-stage.

The balance of Stage 3 impaired loans is the same under all scenarios for some firms.  This happens because Stage 3 loans are only recognised as such when there is an identified loss event at the reporting date.  Macroeconomic forecasts do not impact it, hence the composition of Stage 3 does not change. This differs to Stage 2, which is driven by the expectation of future deterioration in risk, and to stress testing, where the prediction of future Stage 3 population is an important part of the exercise.

Strictly speaking, different scenarios should give a different ECL for Stage 3. For example, when the recovery strategy is for real estate collateral to be sold, recovery will be impacted by different forecast property prices.

However, the time horizon for recovery of Stage 3 exposures is normally relatively short, and the expected cash flows are not materially impacted. This led some banks to conclude that the impact of different scenarios on Stage 3 ECL is too immaterial to be presented in sensitivity disclosures. For example, RBS noted the following:

What has been published? Univariate sensitivities

Some banks also disclosed univariate sensitivities which showed the impact an arbitrary (albeit realistic) change in a single input parameter (such as PD or HPI) would have on the ECL value. For example, LBG presented the following:

These disclosures are useful to stakeholders, but it is important to understand their limitations.

The way in which the sensitivity is applied can also lead to different results between firms. For example, Lloyds note that they have phased in their univariate sensitivity from the Base Case starting point over three years. A different approach/shape to applying the same sensitivity would give a different outcome.

Below we have summarised key observations on sensitivity disclosures from the analysis of 2018 annual reports of major UK banks. We excluded Standard Chartered from this analysis as they adopted a Monte Carlo-based methodology rather than the one based on discrete scenarios.

What have the regulators said?

In October 2019 the FRC published a thematic review of IFRS 9 disclosures in the first year of application.  They had a view that disclosures regarding the application of MES and methodology were generally good but that there is scope for improvement in the disclosure of assumptions underpinning firms’ scenarios.

They also noted that firms “made a reasonable attempt to show the sensitivity of the ECLs to changes in economic variables” but that there was still scope for improvement. In particular they highlighted the lack of consistency between firms and that they consider banks should “not assume that sensitivities will not affect Stage 3 provisions”.

As such a critical window on firms’ ECL approaches it seems inevitable that both regulators and auditors will guide more firms to improve their sensitivity disclosures and encourage convergence in the information provided.

1To illustrate, if we have a mortgage with LTV of 75%, expected losses will be negligible until house prices fall significantly enough so that net recoveries from the sale of the collateral do not cover the exposure.  Until that point, there will be very little sensitivity of ECL to forecast house prices, but after this point, the losses will start rising very quickly, resulting in a non-linear relationship between house prices and credit losses.

Richard is a Partner in Deloitte’s Audit & Assurance function and leads the Credit Risk team.  He has 20 years’ experience working in both banks and advisory roles.

Mikhail is a senior manager in Deloitte’s Credit Centre of Excellence with over 10 years of experience working with banks and other financial institutions. He specialises in credit risk and loan impairment.